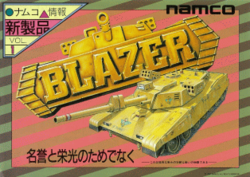 Blazer (ブレイザー, lit. Bureizā), is an isometric shooter arcade game, that was released by Namco in 1987 only in Japan. It runs on Namco System 1 hardware, was the first 16-bit game to use a 3/4-view perspective, and was also the first game from Namco to feature a "legal notice" on startup saying that the game was for use in Japan only. With the exceptions of Beraboh Man, Bakutotsu Kijūtei and Four Trax, every Japan-exclusive game Namco has released since has featured a similar notice on startup - and even if some were later released in the US, it still appears on startup on the Japanese versions.

The player alternates between a tank named "Vanguard" and a helicopter named "Maiheriko" (and for the final mission, a boat named "Maiboto"), to kill enemies both on land and in the air. Some airbased enemies will leave behind powerups for Vanguard to collect, when hit by its anti-aircraft missiles; they can restore its fuel, increase its fuel capacity, make it invulnerable for a short period of time, and even grant it an extra life if it manages to collect enough of them (initially thirteen, but can go up to sixteen).