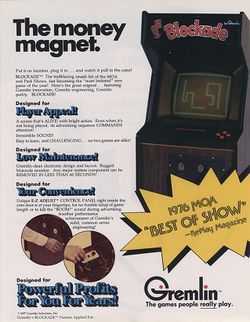 Blockade is Gremlin Industries' very first arcade game (released in 1976); it runs upon an Intel 8080 microprocessor (running at 2.079 MHz), and won that year's MOA "Best of Show" award (as you can see in the flyer to the right). It is an action game, in which one player can play alone against the CPU or two players can play together, by making lines around the screen to trap their opponent and leave them unable to move - which could be seen as a distant forerunner to that "Light Cycle" level of Bally Midway's Tron. Each time you trap your opponent and leave them unable to move, you will receive a point; the amount of points that players need to win the game depends on what that arcade operator has set it to, and will be displayed at the top of the screen (either 3, 4, 5, or 6). Gremlin later went on to release a four-player simultaneous version of this game named Comotion, which was housed in a cocktail cabinet - and another two-player version named Hustle in which players had ninety seconds to run into boxes then gain their point values. In a one-player game, running into the CPU opponent, the walls, or your tail would give you a penalty; however, in a two-player game, forcing the opponent to do this would award you extra points. Atari's Dominos and Midway's Checkmate, which were both released in the following year, also featured similar gameplay to this title - however, Checkmate was more similar to Comotion, on account of it again allowing up to four players to play it simultaneously.