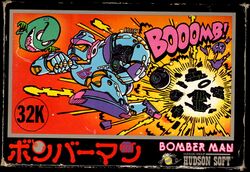 The Bomberman series may be as well known to video game players as Mega Man, Castlevania, and even Super Mario. It has certainly been around as long. And like many of these other series, the first game is a rapid departure from what later games in the series would ultimately become, but the series as a whole is indebted to its roots for being a successful game in the first place. Although it didn't reach one million sales, it did sell a reported 800,000 copies throughout its lifetime. 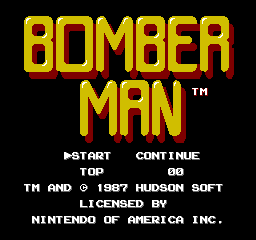 The Bomberman series actually starts even before this particular NES game. A very simple, drastically different looking "Bomber Man" (according to the title screen) was released for the MSX. The gameplay was more abstract, featured only one enemy and no power-ups, and the only goal was to find the exit without dying. Hudson Soft dramatically improved the game for its Famicom release by adding a number of enemies, horizontally scrolling stages, and the power-ups that make keeping Bomberman alive so worthwhile. But they also made the first steps in shaping the Bomberman character that most people know and recognize today. The sprite used for Bomberman actually came from an enemy sprite used in Hudson Soft's very successful Famicom conversion of Lode Runner. One of the robotic enemies that chased the Lode Runner hero learned that he might become human if he can climb fifty underground floors to escape from his plant and reach the surface of the world. The only weapon at Bomberman's disposal, of course, are bombs.

As a gift to the platform that Bomberman started on, Hudson Soft released an updated version for the MSX called Bomber Man Special that was updated to reflect the Famicom version. It was five years before Bomberman was followed up by two sequels, the first of which was actually made for the TurboGrafx-16 in 1990. Outside of Japan, it was known as Dyna Blaster, while in Japan it shared the same name as its predecessor even though it was a tremendously enhanced game. The second sequel was a proper NES sequel entitled Bomberman II. Subsequent releases on the TurboGrafx-16 and the series' debut on the Super Nintendo lead to the definition of the White Bomber character as a mainstay hero of the video game realm. In 2004, Nintendo gave Bomberman the distinction of being included in they Famicom Mini, and Classic NES lines of Game Boy Advance conversions. Hudson Soft re-released the game on the GBA along with Bomberman II in Hudson Best Collection Vol. 1, published only in Japan.

Our hero, Bomberman, worked in a bomb factory located in an underground labyrinth. He grew very bored making bombs day in and day out. One day, he learned of a rumor that stated if a robot could ever escape the labyrinth and reach the surface of the world, his wish would be granted and he would become human. Bomberman is determined to find out if this rumor is true.