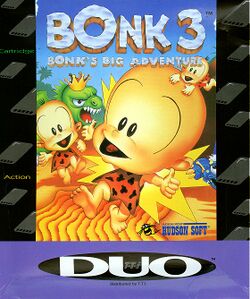 Bonk 3: Bonk's Big Adventure brought the series many new gameplay elements, including candies that made the player shrink and grow, and cooperative multiplayer. The story is similar to that of the other Bonk games, putting the player character up against Evil King Drool and many new enemies in the Dinosaur Kingdom.