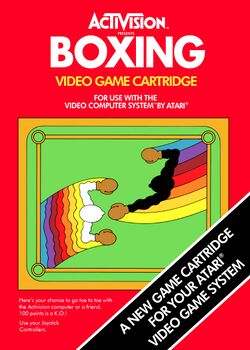 Boxing is an unreleased arcade game from Atari, created by Mike Albaugh in 1977. The 1980 Activision title of the same name for the Atari 2600 is essentially the same game, except it features a few more colors than its black and white, raster graphics predecessor. The later game was designed by programmer Bob Whitehead. The arcade game intended to utilize a unique controller where players could swivel left and right handles to simulate the movement of throwing a punch. However, the machines couldn't stand up to the force players put on grip sticks, and so the game wasn't released.

Boxing shows a top-down view of two boxers, one white and one black. When close enough, a boxer can hit his opponent with a punch (executed by pressing the fire button on the Atari joystick). This causes his opponent to reel back slightly. Long punches score one point, while closer punches (power punches, from the manual) score two. There are no knockdowns or rounds. A match is completed either when one player lands 100 punches (a "knockout") or two minutes have elapsed (a "decision"). In the case of a decision, the player with the most landed punches is the winner. Ties are possible.

While the gameplay is simple, there are subtleties, such as getting an opponent on the "ropes" and "juggling" him back and forth between alternate punches.

Boxing is played in one, two-minute round against the computer or another player. During that time, you score points by hitting your opponent's head. You can achieve a KO at 100 points, or else the player with the highest score at the end of the round is the winner (a tie is also possible). Hitting your opponent's hands does not count for points, and should be used by you as a blocking mechanism.

When throwing punches you need to take into consideration the distance to your opponent and how your fist is lining up with his head. If you are in too close your punches will be ineffective, and if you are too far away, you'll miss. You'll also need to move up or down to line your punch up with the opponent's head, rather than hitting his gloves, which has no effect. 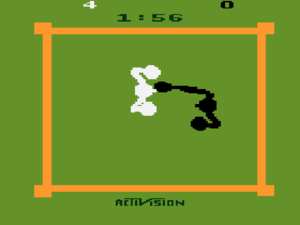 A properly lined up punch by the black player.

Start by pressing the attack and pushing the opponent back into his side of the ring. As you are moving him, put more pressure on one side to force him into the opposite corner. Once in the corner, your opponent will have nowhere to go, and as he moves up or down to escape the corner, you can time your punches to push him back in. This strategy can also be used up against the ropes in general, though you'll have to decide which direction to punch in, as your opponent can go up or down if not hampered by the actual corner of the ring.

Watch for your opponent's patterns (in single player mode), and use them to predict his movements. By understanding the opponent's next decision, whether it be to move or punch, you can select your action appropriately.

Make use of blocking by moving up or down to send your opponent's punches into your gloves. Not only will this prevent him from scoring, but it will give you time to throw a counter punch as well.

If you can get into a good rhythm of left and right punches, it's possible to go from one to the other for a long period of time without your opponent being able to escape or counter.