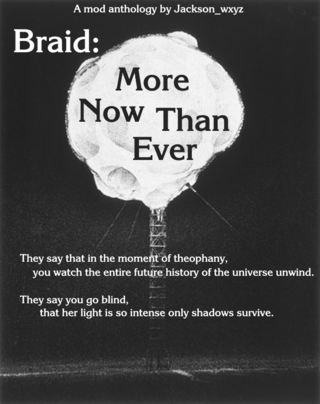 Several level packs are available to download and play. Made using the in-game editor included with the PC version of Braid, the mods typically contain fan-made puzzles, remixed level art, and new story content. Not only can new puzzles be created using the existing mechanics, but the mechanics themselves can be modified. For instance, in World 6, Tim's ring can be made to speed up time or freeze it entirely instead of slowing it down. It's also possible to activate multiple time mechanics at once, so Tim can place the ring, create shadow parallel worlds, and exploit the time-space correlation of World 4, all in a single level. Several of the mods available to download include:

Braid: More Now Than Ever (https://www.moddb.com/mods/more-now-than-ever/videos)