Brain Games was one of the eleven Atari 2600 titles that were part of the second wave of games released in 1978. It is one of the first games to utilize the Atari Keypad controller. Brain Games started out as a project to recreate Atari's Touch Me for the home console market, but it contains a variety of similarly styled memory games as well.

Touch Me is an arcade game that Atari released in 1974, and later as a handheld game in 1978. It can be described as a Simon-like game that involves touching a series of buttons that light up and produce sounds. The player must observe a sequence of blinking lights and repeat the sequence back in the same order that it occurred. Each time this is completed, the game will reproduce the sequence with an additional button added. This process is repeated and a digital score window displays the total number of sound sequences a player correctly repeats. The game continues until the maximum sequence of buttons is reached, or the user makes an error.

The arcade game found itself competing for attention in arcades with the latest pinball machines and video games of the day and was not very successful. In 1977, Ralph Baer saw potential in the "Simon says" concept behind the Touch Me game. He improved upon it significantly, adding colored buttons and musical sound effects, and created the Simon hand held game, which became a major success. Seeing this, Atari sought to capitalize on the success of Simon and released their own handheld version of Touch Me in 1978. Unfortunately, like the arcade original, the Touch Me hand held game was not a major success. Many saw the Touch Me hand held as a clone of Simon, when in fact it was the other way around, and Touch Me soon vanished from sight. Simon, meanwhile, continues to be sold nearly 30 years later. 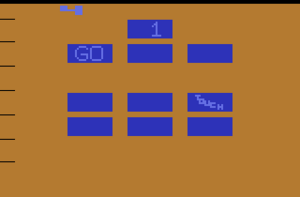 Games 1 and 2 are single player games, while games 3 and 4 are two player games in which the players alternate. As one player enters the sequence correctly, a new tone will be added for the other player. The computer will say GO underneath the score of the player whose turn it is. The game ends when either player reaches four "misses", or if both players correctly complete a 32-tone sequence. 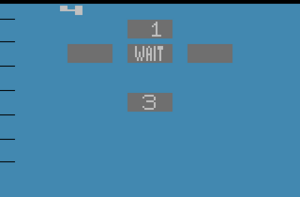 Games 5 and 6 are single player games, while games 7 and 8 are two player games in which the players alternate. As one player correctly identifies the sequence, a new digit is added for the next player. The computer will say GO underneath the score of the player whose turn it is. The game ends when either player scores four "misses" or if both players correctly complete a sequence of 32 digits.

Games 5 and 7 will only utilize the numbers 1 through 6. Games 6 and 8 will utilize all of the numbers on the keypads from 1 through 9. 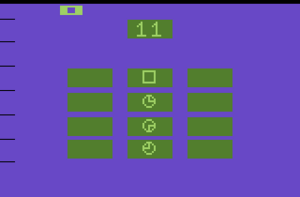 In game 9, you have four seconds to memorize the original order of the objects, in game 10 you have 1 1/2 seconds. You get one point for each object placed in the correct position and a bonus score based on the time taken to remember all the objects. Five sets of objects are a game. 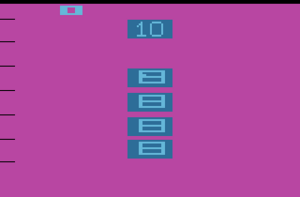 The computer generates a set of four objects on the screen. All, except one, are identical. Your score is based on the time taken to find the one dissimilar object. You can continue to enter guesses until the timer runs out. The correct answer will show in the box at the top of the screen. There are five sets of objects per game.

Games 11 and 12 are one-player games, where you use the left-player controller, and try to improve your score with each game. In games 13 and 14, two-player games, each player is competing to find the same dissimilar object and score first. 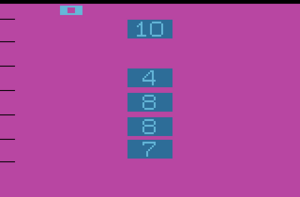 A set of digits is generated by the computer. You score by adding the digits and entering the sum before the timer runs out. The correct answer will appear in the box at the top of the screen. There are five sets of digits per game. Enter your answer just as you would with a calculator. If the sum of the digits is a single unit (4 to 9), you must enter it as a zero-sum (04, 05, etc.).

With the left-player controller continue to practice on the one-player games 15 and 16. In the two-player games 17 and 18, each player is trying to enter the sum of the same set of digits and score first.

In Game 19, your Keyboard Controllers become musical instruments. Each button on the controller will generate a different musical note, allowing you to play songs. If both controllers are used, duets can be played on your ATARI Video Computer System game. The difficulty switches have no effect on this game.