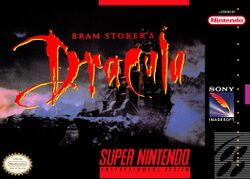 This guide is for the SNES and Genesis platform game. For the game released on other platforms, see Dracula (disambiguation).

Bram Stoker's Dracula is a platform game released for the NES, SNES, Sega Master System, Sega Genesis, Sega CD, MS-DOS and Commodore Amiga game consoles in North America, Europe, Japan, and Australia. It was developed by Psygnosis and published by Sony Imagesoft. Based on the 1992 movie of the same name, each version of the game was essentially identical (except for the Sega CD and MS-DOS versions).

Players control Jonathan Harker, a man who must fight his way to reach and destroy the monster known as Count Dracula. Along the journey he is given additional armaments by Van Helsing.