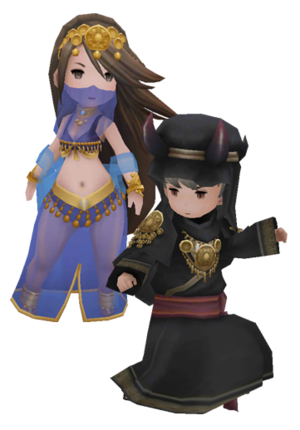 Spell Fencers are based on the ubiquitous Mystic Knight archetype from traditional Final Fantasy games, using magic to grant effects or power up physical attacks. The Spell Fencer class has balanced stats without really specializing in anything, so it's a poor choice as a main class in the long term. However, the Spell Fencer's skillset is amazing as a job command, complementing nicely with just about any physical classes in the game, and will likely become your main source of elemental damage by the mid-game.

Raise Magic Defense by 50% for four turns when hit by a magic attack. The upper limit for M.Def is 150%. As its name suggests, Spell Fencers make good counters for opposing magic users as their magic defense automatically increases when struck by magic spells. It doesn't synergize particularly well with any Sword Magic, but it does give Spell Fencers a particularly strong stat for a jack-of-all-trades character.

The Spell Fencer shares the same magic scrolls as Black Mages, with the exception of Holy which requires a White Mage scroll instead.

As stated multiple times before, the Spell Fencer works best as a job command rather than a character's primary skillset. Thus, it won't see a lot of use as a main job, only as long as needed to obtain the desired level of Sword Magic. Nevertheless, all offensive physical jobs like Monk, Ranger or Valkyrie can supplement a Spell Fencer's kit. This is also true for the opposite scenario, as offensive physical jobs would benefit the most from Sword Magic. It's especially desirable for Dark Knights, who can use Drain to negate self-damage from their Dark Arts.