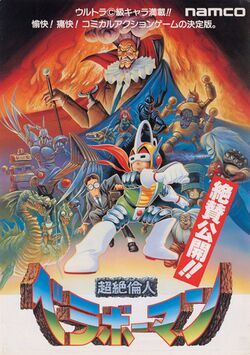 Bravoman (the complete Japanese title: Chouzetsurinjin Bravoman, 超絶倫人ベラボーマン, literally Chōzetsurinjin Berabōman) is a beat 'em up (and horizontal scrolling shooter) arcade game, that was released by Namco in 1988 only in Japan; it runs on Namco System 1 hardware and was later ported to the United States TurboGrafx-16 in 1990 (this version of the game was also later rereleased on the Nintendo Wii's Virtual Console, in 2007, and described by Namco as a "comical action game"). It was also the only game from the company to utilise pressure-sensitive buttons upon its control panel, and the first of what would only be three Japan-exclusive 16-bit games from them after 1987's Blazer that did not feature a "legal notice" saying that the game is for use in Japan only on startup - the other two are Bakutotsu Kijūtei (which was released later in 1988) and Four Trax (which was released in 1989).

The game's story begins when a typical Japanese insurance company salaryman (who is a caricature of Namco's then-62-year-old founder, Masaya Nakamura, 1925-2017, but his name here was "Aruhi", written in Hiragana as あるひ) sees an alien from the Planet Alpha in the sky, who informs him that an evil scientist named Dr. Bomb (original Japanese name: Bakuda-Hakase, 爆田博士) and his army are planning to take over the world; the alien then gives him a metal rod, a tuning fork and a 100-yen coin (the last one being the standard Japanese currency for the operation of arcade cabinets at that time), transforming him into a tokusatsu superhero named "Bravoman", who must use his extendable bionic limbs to fight Dr. Bomb and his henchmen, and he will not stop until they have all been defeated (with the exception of Tekyuu, as they are indestructible) and the world is once again safe for all humanity.