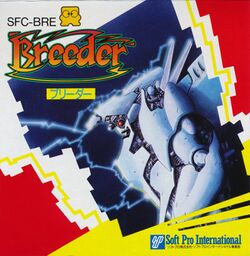 Breeder is a mech-fighting simulation game developed for the Family Computer Disk System by Soft Pro in 1986. This is the third game developed by Soft Pro for Nintendo's system after Karateka and Circus Charlie, and their first original concept.

Despite the title, no breeding takes place in this game. Instead, players are given the ability to create and manipulate the statistics of eight robotic fighters. The only interaction that takes place between the player and the game is the manipulation of these stats, so as to create a powerful robot within a given set of parameters. Once the statistics are designated, the only thing that the player can do is set the robots against one another in an arena to see who comes out on top.

This game was not designed to be a stimulating action game that the player controls, but rather an experimental game where the player continuously tweaks the stats of each robot to see what effects different alterations have on each fight. This game was never released outside of Japan.

To create a robot, the player must first select "Metal Soldier Making" from the main menu. Then the player may choose the give a robot in one of the eight available slots a name. When the player is ready, he or she must choose "Adjustment" to begin manipulating the statistics. You get a pool of 999 points to assign to a robot through any combination of statistics.

There is one other aspect of the mech that you can control, its body type; 2 Legs, 4 Legs, Snake, Hover, 3 Tire, 6 Tire, and Belt. It is unknown if this has any effect on the mech's ability to fight.

Once a robot is designed, you can leave the making mode and return to the main menu. Choose Game Start, and select one of the eight slots that contain any of the robots that you have constructed. Alternatively, you can press

to call up a list of 8 pre-designed robots for the computer to control. Once two opponents have been selected, you simply watch to see the outcome of the fight. The first mech to lose all of its hit points, or all of its fuel, is the loser.