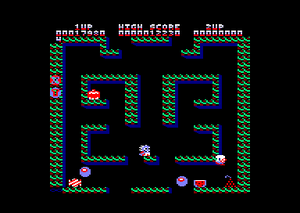 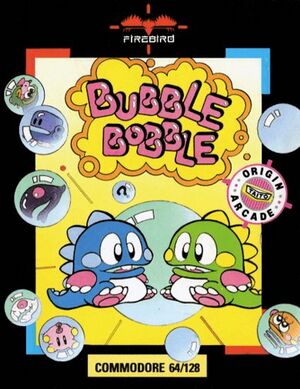 Developed and published in the United Kingdom by Firebird in 1987. Re-released by Ocean in 1988. 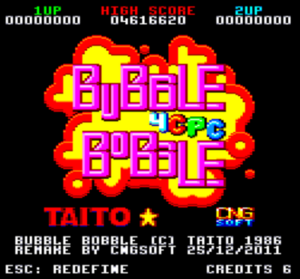 BB4CPC (shorthand for "Bubble Bobble for CPC") is a retro remake of "Bubble Bobble" for the Amstrad CPC 8-bit home computer series. It was developed with the purpose of running on any CPC machine, regardless of RAM size or CRTC model, while staying as faithful to the original game as it could be done in 48 kB of code and data. It was developed by César N.G., under the label cngsoft, and first released on December 26, 2011, and followed up by bug-fix revisions. It is available for download from http://cngsoft.no-ip.org/cng_bb4cpc.htm 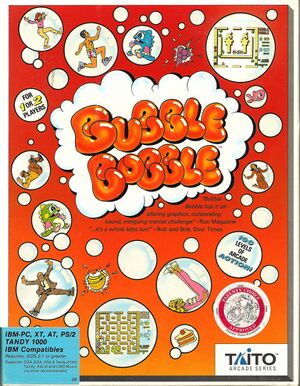 Developed by NovaLogic and published in the United States by Taito in 1987. 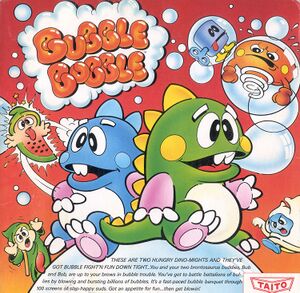 Developed and published in Europe by Firebird in 1987. Published the United States by Taito.

Does not have multiple endings, or the special codes from the arcade version. The secret doors will still appear, but they all contain the same text and statue as the first secret room, and there is no Rascal to chase you out. There is no secret code given at the end to decipher.

After jumping vertically into a solid space, you can pass horizontally through the walls in some ways that you can't in the arcade, making a few of the puzzles easier. Gameplay is slightly slower at 50hz. There are no levels where enemies break out of their bubbles quickly. The Super Drunk boss does not throw bottles, and has no angry form, so you have unlimited time to pop its bubble.

Level layouts are very close to the arcade. No rooms have been completely replaced, or altered in a significant way, but there are very minor differences throughout. Some graphics and animations are a little less detailed than the arcade. 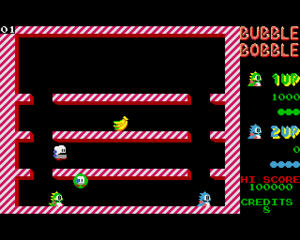 Developed and published in Europe by Firebird in 1987. Published the United States by Taito.

Extremely similar to the Atari ST version. (See above.)

Developed and published in Europe by Software Creations in 1987. Published the United States by Taito. 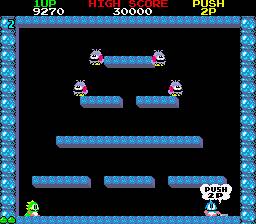 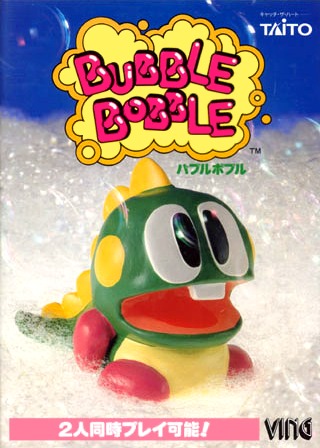 Developed and published in Japan by Taito in 1993.

Developed and published in Japan by Taito in 1990. Published in the United States and Europe in 1991. Potentially the least faithful of all the conversions. In addition to the switch to monochrome, the limited resolution forced the designers to switch to a scrolling view of the screen, potentially limiting the player's view of all the enemies' locations. Many level designs were changed drastically. 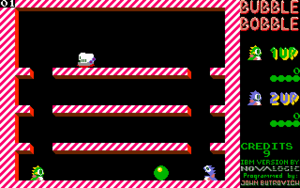 Developed by NovaLogic and published in the United States by Taito in 1989. Mimics the look and feel of the Amiga and Atari ST ports. 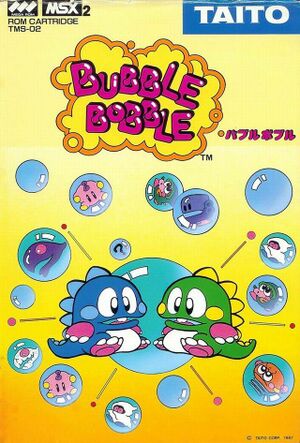 Developed and published in the Japan by Taito in 1987. Remarkably faithful to the arcade version despite graphics limitations.

Developed and published by Taito. Originally released on the Famicom Disk System in Japan on October 30, 1987 with a save feature. Later converted for play on cartridge format for release outside of Japan, using a password system. Released in the United States on November 1988, and in Europe on October 26, 1990. Possibly one of the most commercially successful conversions worldwide, despite some limitations. See the NES walkthrough for more information. 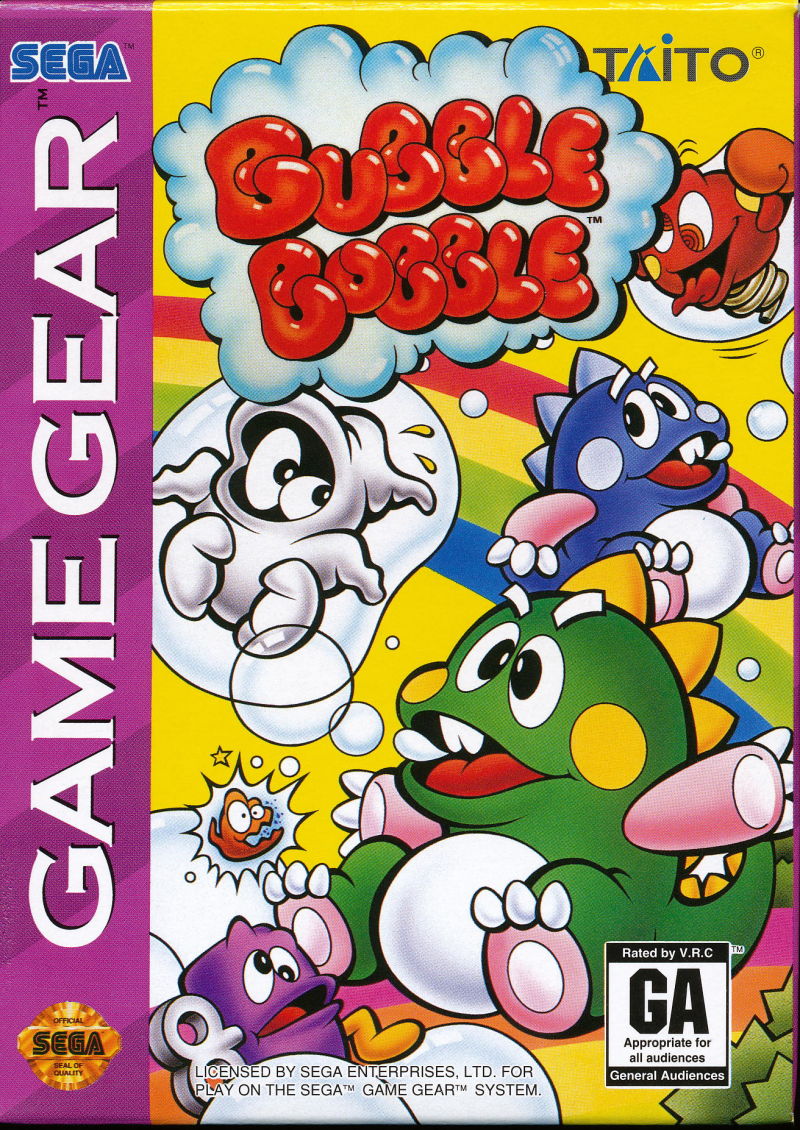 Developed by Open Corp. and only released in the United States in 1994 by Taito. Rather than making the same compromises due to limited screen resolution that the Game Boy conversion made, the Game Gear conversion attempts to shrink the familiar stages to fit on the smaller Game Gear screen. Faithful to the arcade in terms of play mechanics.

Developed by Taito and published by Sega. Released for the Sega Mark III in Japan as Final Bubble Bobble on July 2, 1988. Redesigned with more of a single player item quest in mind with many more hidden doors, some of which contain items which are required to view the best ending in the game. Published in Europe under the traditional Bubble Bobble title in 1992. Also published by Tec Toy in Brazil under the title "Dragon Maze" in 1994. This release was never published in the United States. See the SMS walkthrough for more information. 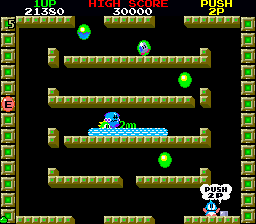 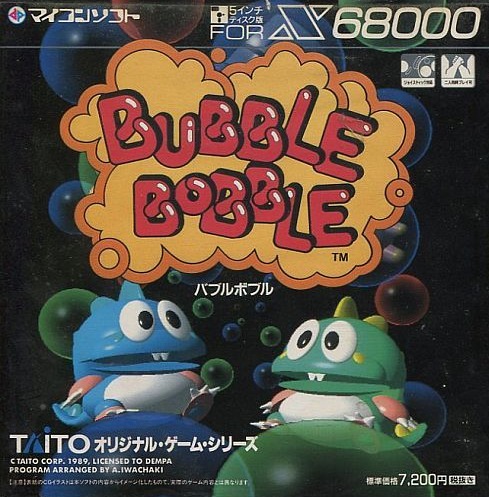 Developed by Dempa and published in Japan by Taito in 1989. As with most every X68000 arcade conversion, this version of Bubble Bobble is remarkably faithful to the original arcade game.

Developed and published in the United Kingdom by Firebird in 1987. Excluding the Game Boy, probably the most graphically compromised and least visually faithful conversion. 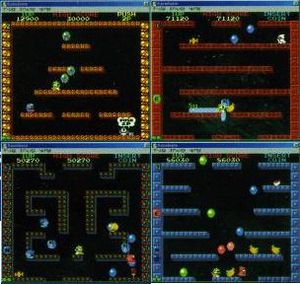 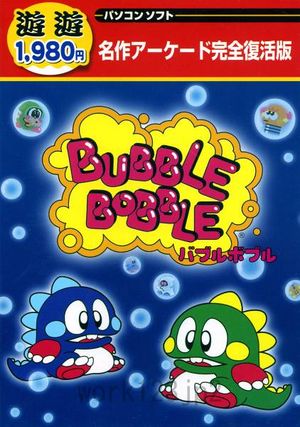 Released in Japan on February 19, 2004, as part of a memorial collection series published for the Windows 95/98/XP operating systems. Presumed to be using a form of emulation, it is arcade accurate.

There is also an unofficial fan conversion for the BBC Micro computer.

Game mechanics in conversions and ports[edit]

Bubble Bobble has been widely regarded as one of the most playable games of all time, owing much of its success to its game mechanics, which are only simple in appearance, and its many hidden features and secrets. Many advanced Bubble Bobble players master techniques such as riding bubbles, 'bubbling' oneself through the screen or 'kissing' monsters, and expect them to work all the time. Some Bubble Bobble ports however, from the date of release of the arcade version up today, have been heavily criticized for their mechanics deviating significantly from the arcade version, adversely affecting the gameplay.

For example, in many versions of the game the two-digit trick to make extra bonuses appear at the end of the stage just doesn't work, or the score and bonus awarding system is entirely different, in part due to the complexity of the original version. Most of the aforementioned techniques can be much harder or impossible to reproduce, thus completely changing (arguably ruining) the gaming experience.

Examples include even comparatively later conversions such as the 1996 PC/PlayStation/Sega Saturn versions by Acclaim: they either have different game mechanics (too fast dropping speed, barely working shoes, bubbles going through walls, different jumping physics and many non-implemented techniques) or different behavior for some monsters (especially the time-up monster).

Another example is the early 1989 PC version by Novalogic, which had the possibility of diagonal jumps with a single keystroke (thus enabling players to go through walls), lacked completely the ability of kissing monsters, and had different rules governing the appearance of some bonuses (most notably the orange-yellow sweet).

The various Game Boy ports and sequels are very different, often featuring scrolling screens, different enemies, and the ability for the dragons to fly.

In general, there are as many variations to the game mechanics as there are versions, with some being more faithful to the arcade version than others and some resulting in noticeably different gameplay experience. Although that is a general rule regarding ports of any game, in Bubble Bobble it can become very noticeable and annoying because of the game relying primarily on its fast paced and trick-filled gameplay.

One of the few versions having game mechanics and gameplay very close to the arcade is the Sega Master System version, despite its introduction of extra gameplay elements. Moreover, the version included in Taito Legends for the Xbox, PS2, and PC should be a near-perfect copy of the original arcade version, as it features the original ROM running under emulation. However, even this version lacks accurate emulation of an MCU in the original hardware that handled monster behavior and other things. As of 2007, fully accurate emulation is implemented only in MAME (versions 0.107u3 and up).