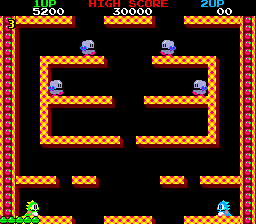 Each level (or round) consists of a single screen which is entirely visible. All levels are composed of platforms which are arranged in various patterns or images. Every level contains two walls on the left and right side of each stage which confine the characters. However, many levels contain openings on the top and bottom of the stage. Characters who fall through the bottom of the stage will reappear at the top and continue to fall down. Each level contains several aspects that change from one round to the next.

First you have to survive till level 100. Take the lightning potion and hit the bad guy with 100 lightning bolts. His pattern is easy to follow and very predictable, just avoid his projectiles. He'll end up in a big bubble, pop him for 1,000,000 points! You've found love and friendship! If you finish the game with only one player then you are told that it is not a true ending and you should "Never forget your friend!"; you are sent back into the game to "try again!!". Even if you finish the game like this with two players, you get a good ending which is still not the best ending.

In order to get the best ending, you must play in "Super" mode; that is when you input the title screen cheat which makes the cloud read "Super Bubble Bobble", not just "Bubble Bobble". Monsters will be swapped with their Super-Mode counterparts. If you beat all 100 levels of Super mode, and beat the boss with two players, you get the "True and Happy ending".

Bubble Bobble allows continues to be used when a player runs out of lives. While most arcade games display a continue timer before returning to the title screen, Bubble Bobble ends immediately once there are no players in the game.

A single player can cover for the other player returning to the game. However, a lack of second player requires a credit within the machine, as well as holding down the start button just before the game ends.