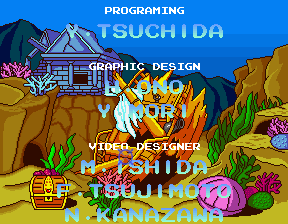 As mentioned on the previous page, if you kill every enemy that emerges from Boss Water Ghost after you have shot him enough times to defeat him on the final scene, you will get to see the game's secret ending sequence; rather than going into high-score mode after its normal ending sequence finishes, it will display a cartoon-style picture of its electro-mechanical diorama on the screen while its staff credits start scrolling up into view from the bottom of it:

After the credits have finished, the game will go into high-score mode; your scores will most likely be the two highest ones on the cabinet to date, so you should enter your initials at the top of the table with pride regardless of which way around they are positioned. Once you have done so, the game will go back into attract mode and end the Golly! Ghost! series after two years and as many titles (which were Namco's only electro-mechanical/game hybrids).