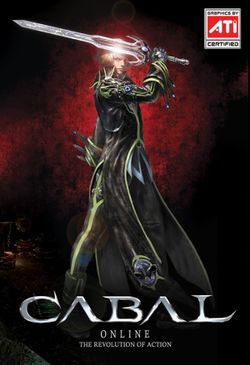 Cabal Online is a free massively-multiplayer online role-playing game (MMORPG), created by ESTsoft. It was released from open beta testing in Europe on December 21, 2006. In North America, OGPlanet has picked up the license for the game and open beta testing began February 1, 2008, it lost the contract on March 31, 2010 however and ESTSoft now directly controls that version. On March 3 2008, the game officially launched in North America. The open beta also began on March 3, 2008 in South-East Asia.

Cabal Online is an action MMORPG game, set in a third-person view perspective. Like most modern MMORPG games, it includes a skill and class system, pvp system, and a guild system. It also utilizes a combo system within its gameplay that allows players to have more powerful attacks based on timing. The primary aspect of leveling in the game is quests. Typical quests involve moving from one place to another, interaction between NPCs, killing enemies, and dungeon quests.

The game takes place in a mythical world known as Nevareth, which has been decimated by an evil entity known as CABAL. Survivors of the devastation were scattered across the now-barren landscape. In this world, seven "masters" rose up, each wielding the ancient abilities of the "Force Power". These masters taught the people, and the world was rebuilt. One year later, the CABAL is plotting a return to power by breeding a child to be the new king of the people. The players of the game take up the role of heroes who battle the CABAL uprising and conspiracy.

The skill system allows players to deduct or remove skills completely by paying in-game currency. At every decadic level there is a promotion quest to earn one of either of these special skills: an astral weapon, aura mode, battle mode, combo start or an upgrade in either of these 5 skills. The PVP system has a limit of 3 minutes in which you must kill the player in order to receive 1 honour point (that can be used for buying higher stacks of items/potions in 1 inventory slot) and the player is automatically sent to the nearest town with no death penalties.