Call of Cthulhu: Dark Corners of the Earth/A Dangerous Voyage

At the start of this chapter, Jack is fished out of the water by members of the Cutter Urania.

The captain gives you a briefing of what needs to be done. After the FBI interviewed the locals, they determined that there's a stronghold at Devil's Reef. Until the assault starts, you can walk around the ship and talk with the crewmembers.

The first one to talk to is the navigation officer on the bridge, who will suggest speaking with someone on the main deck. This causes one of the seamen to announce taking a break. When you talk with him on the main deck, this starts a discussion which commences the fight with the Deep Ones. Grab the rifle dropped on the ground, and defend the ship.

While the Deep Ones are invading (about 45 seconds after the attack starts), the Seaman Gene Henson will call you over to the door, and ask you to retrieve ammunition from storage. The storage is found to the back and right, down one flight of stairs. It also has a save point and a shotgun which you can pickup.

When you return and give the ammo, the seaman will ask you to retrieve a medikit from the infirmary. It is through the doors to the left, and one of the Deep Ones found its way in. Kill it, and grab the medikit on the left. There is a medikit here, but you could save it for a bit later if you're close to capacity.

When you give the medical kit, you will need to repel the enemy for about 45 more seconds. After this, they retreat from the full-force attack.

Under Windows Vista or later, the targets are invisible. Using DCotEPatch modifies the game to skip the scene after three waves. Without the patch, use the following blind-fire guide based on the ruler positions:

The lull in enemy attacks is to allow the sorcerers on land to push the boat back with giant waves. Quickly run to the rail on the main deck, and grab it. Wait for the wave to pass, and the officer will instruct you to use the cannon to hit the sorcerers on the land.

At the cannon, aim towards the three glowing lights on the land. Every thirty seconds will have Officer Winter announce another incoming wave, and you will have to run back to grab the rail (crouching is not required). Once the boat levels, you can head to the cannon for another few shots.

There may be one last wave when you destroy all three targets. After the final wave, a crewman speaks with Officer Winters about the state of the crew and the Captain locking himself in his quarters.

Captain Hearst has the key to the armory, but the path through the mess is blocked. The only route is by going through the stern. Officer Winter asks you to follow, and you will need to close the doors behind you. The door to the infirmary needs to be closed and bolted. Collect the first aid kit if you haven't already and head through the back door. Once you enter the door towards the engine room, bolt it behind you. The Deep One will smash the door, but it will hold.

The armory is just past the main engine room. On the way, you will find another seaman (and a save point in the crew's quarters), and see said seaman get killed by a deep one. A steam vent will burst, requiring you to turn the valve on the left. The crew members will walk to the Captain's quarters, where they call out to the Captain as he recites a passage from the Bible, before shooting himself. As the key is in the quarters, you are instructed to find a way around, when Officer Winters collapses.

Climb down the ladder, and enter the second air vent. This leads to the captain's quarters, where you can retrieve the key to the armory.

The armory contains a tommy gun, and dynamite. When you pick up the tommy gun, deep ones will spawn from the engine room and attack.

With the dynamite, head down, and plant the dynamite on the vent fan leading to the mess hall storage. Enter the mess hall, and speak with the cowardly technician - he will state that he holed himself up in the mess hall to protect himself from the invading monsters. The engine will break down, and he will ask you to fix the engine by yourself, and give you the key to the cargo hold to get the necessary equipment.

Upon leaving the mess hall, you'll notice that the main exit is blocked by dangerous steam. Instead, climb to the floor below, and close the engine door. Continue to the other side, and past the crew quarters where you can unlock the hatch to the cargo deck.

The cargo deck has the welding kit in plain sight, but the deep one will approach as soon as you pick it up. Return to the engine room, and turn the corner valve on the middle floor (by squeezing on the left, avoiding the steam. Next, reach the top part of the room - there is a maintainence ladder found near the stern of the room, with a padlock that needs to be shot open. Climb the ladder, and head to the corner to see a broken steam pipe. Use the welding kit to fix the leak.

Head to the bottom of the room, and turn the valve next to the engine. If you fixed the pipe, the engine should work normally, and you can return to the mess hall and give the welding kit to the engineer. 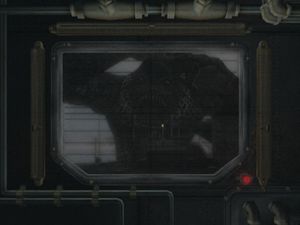 As soon as you return and give the welding kit, a few deep ones will burst from the upper staircase. This allows you to return to the main deck, where the engineer welds the door behind you in a room with a deep one.

Father Dagon then rises in front of the ship, in the last attempt to keep you away from the island and underwater city. While he is in front o the bow, you can aim the cannon at him, and fire.

His attacks are mostly from the side of the ship, with the most common being a single slam on the main deck. Occasionally, he will grab the front-left of the ship with both hands, and shake it, requiring you to grab hold of the bar to avoid taking damage. He will not repeat the same attack twice in a row. Thus, the safest location is to wait in front of the mast, backing up if you see him attacking from the front and side, or by following the location of his last known attack.

When the cannon finally finishes off Dagon, he will collapse onto the bow of the ship, pulling it underwater. After Jack reflects over shadows of his past, he will wake up on Devil's Reef.