Call of Cthulhu: Dark Corners of the Earth/Devil's Reef

Jack is washed up on the shores of Devil's Reef, along with some of the remains of the Urania. The wind and waves are also picking up.

Enter the sole passage. When you see a body fall from above, start to exercise caution, not from creatures but from traps. The first is a pit trap, with a save point visible on the other side. Jumping across will trigger a pressure plate, which raises a barrier, before releasing a deadfall log meant to throw you into the pit. The safest option is to jump back, although the log may sometimes only do an injury rather than throwing you back.

The path beyond the save point leads to the windy outdoors. 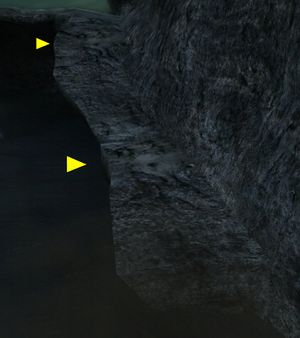 The ledge is unstable. Look at the white spot and black markings to see which segment will break.

You first need to retrieve the strange disc, which is located on the sacrificial platform across the arch. This is reached by moving across the right-hand ledge, but as you approach, part of the ledge will collapse. There are two other segments that collapse when you step on them, indicated by a white spot and black cracks. The safe points between the collapsing segments form a natural jump pattern.

After an image showing part of a sacrificial ritual, you can retrieve a strangely carved disc. This is used to open a secret door in one of the later passages.

With the disc, you can backtrack to the save point, likewise jumping over any collapsing segments.

The next two items can be found in a side track. From the save point and going outside, follow the left ledge. Jump over the collapsing segment, and take the downward passage to the left.

The passage has a few clusters of starfish, which signal their attack by a distinct starfish forming on one of the clusters. It is generally safe to run past them, as they inflict only light damage and poison, and you can fix both injuries on the way back with common bandages or rarely-used antidotes.

The chamber shows wall drawings showing how citizens of Innsmouth took the oath of Dagon and bred with the Deep ones. In the middle is a skeleton holding onto a pulley, which you can take. Also, one of the murals has a missing disc, which you can place from your inventory. This opens a secret door containing a room of gold, a hanging body, and a bent piece of metal serving as a lever for a switch.

Once you have both items, and finished looking around, return to where you entered the side track.

The main path heads upward from a stone staircase, but there's a place supported by a few wooden boards. These boards collapse into a spiked pit - jump over them. The next set of boards is less lethal, dropping you before you see the first spiked pit.

When the tunnel turns towards the ocean, there's another trap waiting. Stepping on either of the two pressure plates triggers a pair of traps that impale Jack. To disable the trap, you need to enter the alcove just before the first aid kit, and insert the lever into the slot before pulling it. This covers the pressure plates for a short time, allowing you to jump down and reach the ocean.

The waves and wind in this section are supposed to be strong, and you're expected to grab hold of the rings to avoid losing balance. However, it's easy enough to walk around the cliff wall without difficulty.

At the collapsed bridge, use the pulley on the single rope that remains. This will drop you midway, at a small alcove.

The map, when activated

Within the alcove, you will see a small map. Use the Book of Dagon to translate the symbols, and learn how the map operates. Place Ruth's brooch onto the button that faces the map, then press the button. This raises segments of the map, showing the quickest route to the other pedestal, as well as lighting the path that you use. The map works on a timer, and if it runs out, you'll need to return and press the button again.

Leave the green gem in position. It needs to remain there, and removing it seems to be linked with a sanity loss effect.

From the map, exit the alcove and jump across the chasm to the small ledge. Turn left and follow the route that you saw on the map, following the red dots on the ground. Where you see the set of crabs, head into the vine-covered alcove on the left. After the first corner in the side passage, jump over the pit. When you reach the final room, put the red gem on the pedestal. Once the timed sequence finishes, the door will open if both gems are in position.

The doors lead to a cavern. The only thing of interest is a windy vertical shaft, which you need to enter.