Call of Cthulhu: Dark Corners of the Earth/The Marsh Refinery

Hoover has interrogated you, and instructed to follow him back to Innsmouth for a raid on the Marsh Refinery.

When you get out of the car, run towards Hoover. He'll instruct you to take out he machine gunner. You will need to advance when the FBI agents perform their covering fire. The first time you cross over, run to the right and circle around the crates. The second crossover is to the other FBI agent. Look for a small gap in the crates, and you'll be able to flank the machine gunner. When he's down, the other FBI agents will be able to get in close and be able to break down the other doors.

Follow the agents, picking up the shotgun on the way, and speak with Hoover. After the scene about the FBI agent coming out of the elevator, you're directed to power on the generator. Head to the left and down the stairs.

To progress, you need to power on the bucket ride, but first need to start it's generator. You will also encounter respawning enemies, thus you should avoid backtracking in this section if possible.

You first need to get a replacement belt, which is located inside a workshop. To reach the workshop from the autosave point, turn right at the bottom of the stairs, and go down a second flight. You should see a medikit on a crate behind the next door. Go down more stairs, and continue straight at the intersection. Ascend the next stairs to see the doors to the workshop, where you can collect the belt and other assorted weapons. 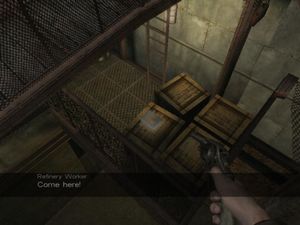 Jump off the bucket here, onto the crates.

The door labeled bucket control allows you to turn on the buckets. Smash or shoot the glass covering the button, and press it. In this room, you can sometimes see the buckets stop at a certain point, which is where you need to disembark.

When the buckets bring you to the room with the control panel, jump down onto the set of four crates with the medikit. Climb the ladder and head down the corridor until you reach a room with the pressure release valve, which you turn to start the next section of the refinery.

After redirecting the steam, you can proceed further into the refinery and continue through the next set doors. There will be a few medikits and enemies, but nothing otherwise special. Your destination will be a grinder, where you will see Agent Nelson being sent to the grinder from his perspective. You will need to head down this conveyor belt in order to see marsh.

When the conveyor belt is turned on and is about to send you into the grinder, jump onto the catwalk. It will collapse and jam the grinder, allowing you to walk down the conveyor belt once again. When you continue the chase after Jacob Marsh, the catwalk will collapse. Continue forward and left, where you find a ladder that lets you bypass the door Jacob locked behind him.

In the following rooms, you can turn on the generator, and return to the main warehouse elevator.

The elevator brings you to the second floor, the foundry. You will enter a close chase with Jacob Marsh, with him ordering the underlings to attack you and slow your progress.

The chase ends when you see hoover being lowered in a cage into the pit. Run to the controls, and stop the cage - Hoover will tell you to kill Joseph Marsh as he's simply too dangerous to keep around, and that the briefcase is more than enough to launch a full investigation.

Follow after Marsh. You can use the save point before following him down the stairs, but he ambushes you as you enter the vat room.

After waking up with your weapon removed, you need to deal with a Shoggoth. Take cover in the alcove to the right to regain your sanity. Once restored, move around the vat as quickly as possible while avoiding attacks by the Shoggoth. Turn on the vat pump to move it across the room.

Exit on the other side (after using the nearby save point), and go through the doors. Once you unbolt the metal door and open it, the shoggoth will try one final chase. Close the door behind you, and run to the end of the corridor. Unbolt the door, go through it and close it behind you. It will stop the chase when you reach the save point.

Return to the ground floor. The shoggoth will try grabbing the elevator - press the emergency open button, and climb out via the crates before the elevator is pulled.

On the second floor of the main warehouse, there is a hatch behind the elevator. You can shoot the lock with a pistol to open the gate. A save point is painted on the right wall.

Press the button to open the maintenance hatch. You need to reach the bottom of the shaft and climb down the center cable - the safest way is to climb the ladder to your left, and slide down the rope from the top of the shaft, but it's possible to jump to it directly. As you climb down, Hoover will say that the explosives will detonate in 20 minutes - this timer starts when the game loads the next map.

Note: This is a timed segment, and the 20 minute timer is already counting down.

Walk down the corridor, press the button to open the side hatch, and climb the ladder. Jack will see the hidden gold vault hidden under the refinery. Approach the door to Gold Vault A, and press the button on the side to open it. Climb the ladder, and proceed forward to the main chamber. The shoggoth is resting here, but still blocks where you need to go.

First, turn on gas pump 1 to have the shoggoth retract. Turn it off and run across the catwalk. Enter the door on the other side, and walk to the end of the corridor, where you can access Gold Vault B. To save some time, unbolt the door in this vault, allowing direct access from the previous corridor.

From the Gold Vault B, enter the door left of the stairs to enter the shoggoth's chamber. You can safely jump over the first tenticle for the first time. To get across the acid, jump onto the wooden crate segments, while avoiding the second tentacle that thrashes on the two jump points. If you miss a jump, you'll likely receive a light injury.

The next room contains a wrench next to a dead body, and a medikit found on a crate to the right. This wrench allows you to turn the other three gas valves. The exit of this room leads back just before the Shoggoth.

Repeat the loop once move - turn on valve 1, turn it off, then cross over. Use the wrench to turn on valves 3 and 4. Continue down the corridor, using the unbolted door as a shortcut. When you reach the Shoggoth, the tentacle is active, but easily evaded simply by letting it thrash once and jumping across when it moves away. When you complete the loop, turn on valves 1 and 2.

Return to where you discovered the vault, and approach the door to Gold Vault C. Press the button and stand to the side as the doors are blasted open. You can now reach the door formerly blocked by the shoggoth, which leads to a room with a Cthulhu statue and a gem. An asylum scene will trigger, resolved by exiting the asylum room and walking down the corridor.

To get the gem, push it a bit towards the door, and press the panel to the left of the statue. If the beam reflected by the gem contacts the gem on the door, it will be released. You can then take the gem, and the federal agents will escort you outside.