Welcome to Call of Duty! This guide will help you lead the Allied army to success against the German forces to success! So let's get started.

There are three stances: upright, crouched, and prone. Upright is your default stance, in which you are standing. You move fastest this way, so use this to traverse long distances and to retreat when necessary. However, standing upright also makes you a bigger target. If you stay upright, keep moving so that you are harder to hit. If you stand still, don't be surprised to find a sniper's scope zoomed in on your head.

Crouched is the second stance. When crouching, you are a smaller target. Use this to take cover behind walls and sandbags. Your movement speed is not very fast but not very slow. This is ideal for moving through a trench when you have enemies on either side. In general, when in a firefight, you will want to take cover and crouch.

Prone is the last. You lie down on the ground and make yourself a very small target. You are also much more accurate and less prone to sway in this stance. However, you move very slow and are vulnerable to attack from behind. If you are going to lie prone for extended amounts of time, make sure you have someone watching you back. There's nothing worse than getting grenade bashed while you're sniping.

You can also jump in Call of Duty. Jumping is good to avoid getting hit, especially in multiplayer. When you need to pass through somewhere heavily guarded by machine guns, bunny hopping (running and jumping) is the best way to avoid injury. However, do note that in multiplayer, when you land after a jump, you do stop for a very short amount of time, making you vulnerable.

Leaning is one of the most vital skills in Call of Duty. When leaning, you can expose a minimal amount of yourself while being able to take out enemies. This is best against machine gunners, who will cut you down if you try to charge. Also use this in the numerous passage ways you will pass through to prevent any surprises.

You have four weapon slots: two primary weapons, a pistol, and grenades. In general, you will want a rifle and a submachine gun with you to attack from both long range and short range. Don't rely on your pistol too much, because it's quite inaccurate and doesn't have a lot of ammo. Grenades are good for room clearing. Remember to aim a little higher because the grenade will drop downward. It is possible to pick up grenades that your enemy throws, but be careful, you have very limited time to chuck it at your enemy. The best tactic is to backpedal as fast as you can. Each weapon also has a melee attack. It doesn't do a lot of damage, but it's good for finishing off the enemy. If you want to save ammo, your best tactic is to shoot your enemy a few times without killing them, then rushing over and meleeing them while they're recovering. Don't do this when there are multiple enemies, though, unless you happen to be very skilled.

Aiming down the sight is one of the most vital rules in Call of Duty. By pressing the right mouse button, you can look down the weapon's sight, steady your weapon, and have a little zoom as well. Rifles will have the most zoom. Use it to score headshots on your enemy. Remember though, you move very slowly when you're aiming down the sight, so only use it when firing at the enemy. For scoped weapons, you look through the scope instead of the sight. Unfortunately, you have no peripheral vision, and are thus very vulnerable to being killed from behind.

You will find health packs scattered about the battlefield unless you are playing on Veteran difficulty, in which case there is none. They may heal 10, 25, or 50 damage. Sometimes enemies will drop a health pack, so if you're low on health, either backtrack or kill a few enemies. Save the 50's for serious injury and use the 25 or 10's if you're only mildly wounded. Remember that it might be a long way until you find another health pack, so if you are wounded, it's better to have your health restored. In multiplayer, players will drop a health pack when they die that will heal a little health.

You can get onto a Flak cannon or a machine gun by pressing the F button. There are two types of flak cannon: the Flak 88 and the Flakvierling. The 88 fires one powerful blast. Use it to take out tanks with one hit, or pesky infantry standing around. It swivels and fires slowly, so wait until you are sure you can hit your target. The Flakvierling is a rapid-fire cannon with four barrels that is used against aircraft. Aim ahead of the aircraft and keep firing, you don't need to worry about running out of ammo or overheating. Machine guns are used against infantry. They have infinite ammo and are quite accurate. However, the muzzle flash and the smoke it creates can make it hard to see your enemy. For this reason, fire in controlled bursts unless there are many adversaries and you are sure you can put them down by spraying. Use them for suppressive fire.

You will drive a tank in a mission. Driving a tank is rather straight forward, use the WASD keys to drive around and use the mouse to swivel the turret. Use the Space button to orient the chassis with the turret. You can only operate the main cannon, but the machine gun will automatically fire at infantry. Stay in motion and reorient yourself regularly to avoid getting stuck. More will be covered on the corresponding mission. 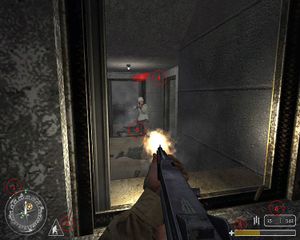 The image to the right shows the basic components of your heads-up display. You can turn it off for a more realistic gaming experience, but because it's so useful it's advisable to turn it on.

The tips to remember: