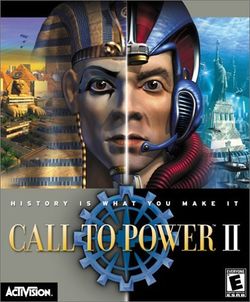 Call to Power II (CTP2) is a PC turn-based strategy game released by Activision as a sequel to Civilization: Call to Power, which was, in turn, a game similar to the Civilization computer game by Sid Meier. The game could not have "Civilization" in its title because the word is trademarked by the makers of the original Civilization series. In October 2003, Activision released the source code, enabling the Apolyton gaming community to debug, improve, and add new features.

Call to Power II has a number of differences from the previous Civilization: Call to Power. Many reviewers and players criticised CTP for its interface, which prompted a complete redesign of the user interface in CTP2. Overall, the CTP2 interface is largely considered cleaner and easier to use, although not without its shortcomings, many of which were caused by programming bugs.

CTP2 also includes several gameplay differences. Maximum army size was increased, some balance adjustments were made to avoid the balance problems from the original CTP, and the economic system in CTP2 was reworked so that controlling good terrain became more profitable. Another difference in CTP2 is that the player can receive bonuses for being the first to complete certain achievements (recapturing a city, sailing around the world, etc.)

The diplomacy model in CTP2 is a major improvement over CTP diplomacy, with more agreements available for negotiation. Players can, for example, ask the AI controlled civilizations to stop researching some technology, or to reduce their nuclear weapons arsenal.

Space colonization and the space layer were removed from CTP2, along with the "Alien Life Project" victory condition. Another victory condition was introduced, which requires the player to cover most of the planet's territory with Gaia sensors and build the Gaia controller wonder, winning the game.