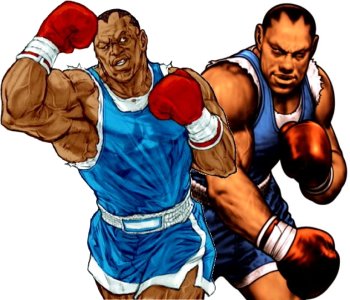 Balrog (originally known as M. Bison in Japan, something of an homage to Mike Tyson but changed outside of Japan to avoid any legal problems), is a henchman of M. Bison's Shadowloo army. While M. Bison and his other aids appear as Ratio 3 characters in Capcom vs. SNK, Balrog's Ratio 2 reflects his low-level status in the crime organization. M. Bison recruited Balrog when he was disgraced by having his boxing champ title revoked due to cheating. With nowhere else to turn, and Bison offering a lot of money for his services, he accepted. It wasn't until he meets another Street Fighter known as Birdie that thoughts of taking over the organization would cross his mind.

The Normal version of Balrog, as well as his Capcom vs. SNK 2 iteration, reflect the style of Balrog that is available in Street Fighter Alpha 3, where Balrog serves as the second to last fight to nearly every contestant. As a result, he has a variety of charge punch moves, and a Level 3 only Super Combo. The Extra version of Balrog is a limited version that harkens back to Street Fighter II Champion Edition, when he first appeared as a selectable character by players, with the addition of his single Super Combo from SSF2T.