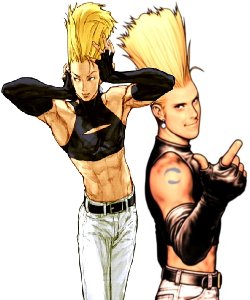 Benimaru Nikaido is one of the main characters from The King of Fighters series, famous for being the second member of the "Japan Team" composed of Kyo Kusanagi and Goro Daimon, as well as being the leader of his own "Benimaru Team" in 2000 and the second member of the "Rival Team" in KOF XI. Benimaru is born of half-Japanese and American descent, and wears a waist-length sleeveless top with matching jeans/pants. Benimaru, while sometimes outspoken and flamboyant, means business in battle since he's very proud of his skills and doesn't want anyone to look down on him for his good looks. He also likes to say English quotes upon winning a battle. He also respects ladies, as shown with a special introduction pose before engaging in battle with a female opponent. Even though he tends to be more than a flighty flirt, when it comes to certain things (along with seeming as if he has an indecisive mind), Benimaru in fact has a heart of gold, his loyalty and respect can go a long way and even behind the American exterior he still holds close the Japanese personality traits.

Normal Benimaru plays very much like his original KOF '94 style. Extra Benimaru is more like his altered KOF '98 style. Likewise, in Capcom vs. SNK 2, he incorporates many of his later abilities.