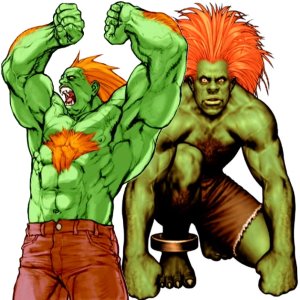 After all this time, Blanka is still something of a mystery. While he appears mutated, he was reported born as a normal human being, who was separated from his mother when he fell out of a plane that was flying over South America. He grew up in the wilds of the Brazilian jungle, and learned a bestial form of fighting that helped him survive. His favorite method of attack is to propel himself through the air while compressing his body into the shape of a ball.

Initially, Normal Blanka was meant to reflect his Street Fighter Alpha 3 style of play with a completely new Super Combo. His Extra version was a variation on his Street Fighter II Champion Edition character, with the addition of the Surprise Forward and Backward hops, and his single Super Combo from SSF2T. However, this mix proved to be a little unbalanced, with players favoring his Normal version completely, so some of his moves were swapped around in Pro in order to even the two versions out. Blanka is one of the most altered characters from the original version and Pro. In Capcom vs. SNK 2, Blanka has all the moves of his Original Normal character, plus the Super Combo from Extra.