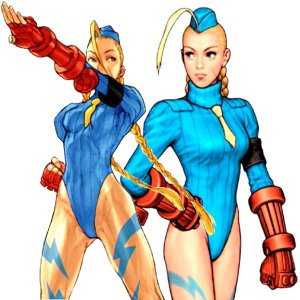 Cammy has two lives: her life before the events that took place at the end of Street Fighter Alpha 3, and her life after her first appearance in Super Street Fighter II. Cammy was originally created as one of the assassination puppets of Shadowloo, known as the dolls. But Cammy was a very special doll because she alone was created from DNA taken directly from M. Bison. At the end of the Street Fighter Alpha series, she gains control of her own mind, and decides to fight against evil instead of being used as a vehicle for it.

This incarnation of Cammy presents her very much as she was before she gained her independence, but her Normal version represents the abilities that she had in Super Street Fighter II Turbo. Her Extra version was something of an attempt to reflect some of the abilities she gained in X-Men vs. Street Fighter and Street Fighter Alpha 3. However, her signature move, the Spiral Arrow, was inexplicably removed, making the Extra version of Cammy extremely unpopular. When the Pro version was released, her Extra version was given back the Spiral Arrow, but in exchange for the Hooligan Combo move. Like many other characters, she represents the fusion of both versions in Capcom vs. SNK 2.