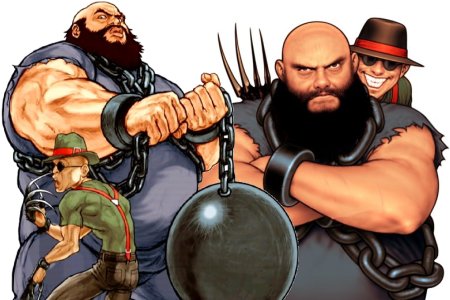 Chang Koehan is a character in the King of Fighters series, part of the Korea Team in the series. In Korean, 'Koehan' means "giant man". Chang was a feared criminal throughout Korea. Once, while he was committing a crime in a humble Korean suburb, Chang met a little man named Choi, and offered Choi to aid him in his crime business. Choi finally accepted his offer, as he was quite bored of his daily life, and wanted a bit of excitement. Both were an unstoppable team feared among the banks and tiny shops, until they were arrested. They broke out of prison, but were caught committing another crime by Kim Kaphwan. They voluntarily joined Kim's "Rehabilitation" project, although they live to regret it every day. Chang is a joyful man, always seeing the bright side of things, and laughing at them. However, his life with Kim has left him very sad, and though he thinks Kim is a boring man, there's nothing he can do to avoid it. Chang is also very reluctant to keeping his mouth shut, and when he always talks ill of Kim, it's always in the wrong moment, earning him and Choi a swift beating. Chang cherishes his friendship with Choi, and both pass most of the time planning their escape when they're not training.