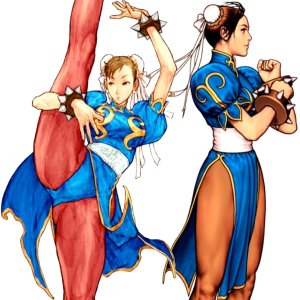 Chun-Li is an agent of the Interpol (International Police) who is assigned to the task force responsible for tracking and shutting down M. Bison's international crime syndicate Shadowloo. It's no coincidence that Chun-Li engages her job with determination; M. Bison is somehow responsible for the death of Chun-Li's father, and she intends to find out how. Knowing M. Bison's penchant for recruiting the strongest fighters in the world, she joins tournaments, not only to prove her title as the strongest woman in the world, but to get closer to the elusive M. Bison. Along the way, she frequently works alongside United States Air Force Colonel Guile, who also seeks to capture Bison in order to find out the location of his missing commander, and best friend, Charlie.

Normal Chun-Li most closely reflects the set of abilities that she has in Super Street Fighter II Turbo, with the addition of two Super Combos that she acquired in the Street Fighter Alpha series. Extra Chun-Li is parred down to her Street Fighter II Champion Edition version with the addition of her SSF2T Super Combo and a new variety of Super Combo that mimics Ryu's Shinkuu Tatsumaki Senpukyaku Super Combo. Extra Chun-Li can execute her Spinning Bird Kick in the traditional fashion, or delay pressing Kick by a split second and pop up in the air while she spins. Interestingly, in Capcom vs. SNK 2 she reflects her 3rd Strike incarnation so she is the only Capcom character to not combine their normal and extra mode into one.