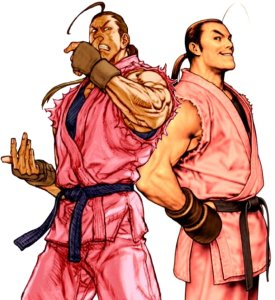 Originally, Dan was intended to be Capcom's tongue-in-cheek jab at rival company SNK's expense. Dan was a secret character added to Street Fighter Alpha, whose appearance could best be described as the body and outfit of Ryo Sakazaki and the head of Robert Garcia, the two protagonists of the Art of Fighting series by SNK. As a spoof, Dan had the worst moves in the game; a fireball that dissipated before it traveled very far, a dragon punch that had nearly no horizontal reach, and a jumping kick move that was slow and predictable. He was chosen by expert players in order to humiliate opponents by defeating them with the worst character available. As he evolved, so did his repertoire of taunts which, unlike his opponents, he had unlimited access to.