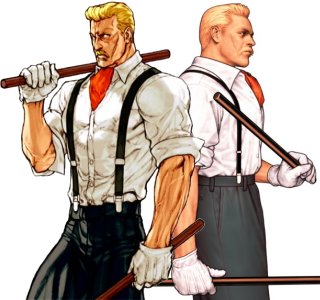 Eagle's first appearance in any video game was as one of two computer controlled opponents from England in the very first Street Fighter (the other being Birdie, who was developed into a bigger character through the Street Fighter Alpha series). He is originally depicted as a refined bodyguard for the upper crust of London society. Of all the characters in the original Street Fighter, Eagle is the only one whose second appearance would be in Capcom vs. SNK 2. He did, however, join the Alpha series afterwards in the GBA and PSP version of Street Fighter Alpha 3. Eagle appeared in the pages of Masahiko Nakahira's Street Fighter Alpha manga years before his actual comeback in the games. The same happened with Maki in the Sakura Ganbaru manga. Both made their comeback in Capcom vs. SNK 2 with slight redesigns inspired by their manga appearances. As of Capcom vs. SNK 2, Eagle became a tribute to Freddie Mercury, with win quotes and inter-character dialogue reminiscient of Mercury. As a result, there are strong hints that Eagle is in fact a homosexual. Each of Eagle's special/super moves are named after a British city, locale, or historical reference.