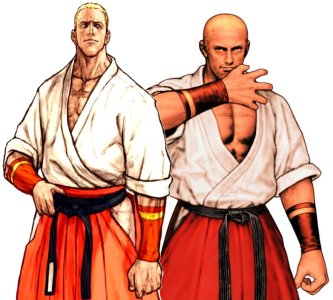 For more information about Geese, see his Fatal Fury and King of Fighters (Orochi Saga) entries.

Geese Howard appears in several SNK fighting games. He is better known as the chief antagonist in the Fatal Fury series up until the Real Bout Fatal Fury series. Geese is the local crime boss of the fictional city of South Town and is the man responsible for the death of Jeff Bogard, Terry and Andy's father. After his death in Real Bout, his son Rock Howard becomes the series' leading character in Garou: Mark of the Wolves. Geese has also appeared in a few The King of Fighters games, while his young self makes an appearance in the second Art of Fighting game. In most games of the Fatal Fury and The King of Fighters series, Geese only wears the red hakama pants with the white gi either not present or hanging off the back/sides.

Normal Geese plays most like his presentation in the Fatal Fury series. Extra Geese most closely represents the abilities that he had in The King of Fighters '96. In Capcom vs. SNK 2, he plays more like Extra Geese, but he has Normal Geese's travelling Reppukens.