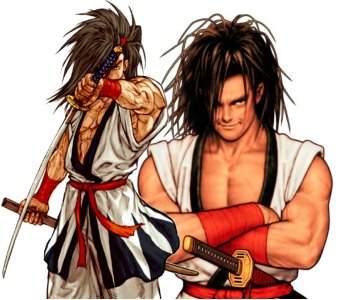 For more information about Haohmaru, see his Samurai Shodown entry.

Haohmaru and Kibagami Genjuro once trained under master Nicotine Caffeine. They were very close friends. One day, master Nicotine told them they would battle to determine who would learn the secrets in a magical scroll to increase their fighting ability. Genjuro won, but almost killed Haohmaru; in response, Nicotine expelled Genjuro. After this, Haohmaru traveled the lands perfecting his sword skills, and searching for worthy challengers. Hearing of Amakusa's return into the world, Haohmaru sets out to defeat him. He does so with the assistance of Nakoruru, Hanzo, Galford, Charlotte and Ukyo. On his many travels, Haohmaru found a village that had been slaughtered to the last man, save a small child. He took in the child, Shizumaru, and trained him in the fighting arts. Haohmaru's appearance in the Capcom vs. SNK 2 tournament is anachronistic; he would no longer be alive by this time.