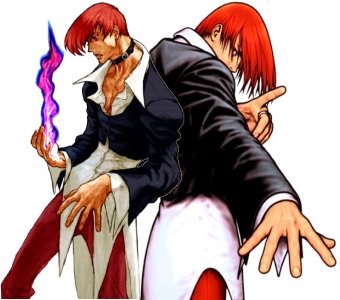 Iori Yagami made his first appearance in the Neo Geo fighting game, The King of Fighters '95. He is a central recurring character and the initial enemy (and eventual rival) of Kyo Kusanagi. He wears an instantly recognizable outfit of a black jacket (slightly cut off above the waist with a white crescent moon on the back) over a long white button-down shirt with the sleeves open, red pants that are tied together just below the knees with a red belt, and a black leather collar around his neck. He also wears a plain silver ring around his left middle finger. The significance of the ring (if any) is unknown. Iori is the current descendant of the Yagami clan (it is rumored that Rock's mother is a descendant of the Yagami clan; because she is the descendant of a female she does not have the last name Yagami). Kyo and Iori continue the ancient feud, though fate would (somewhat) steer them off the footsteps of their ancestors.