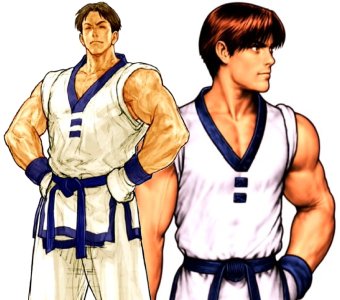 For more information about Kim, see his Fatal Fury and King of Fighters (Orochi Saga) entries.

Kaphwan Kim, usually written surname first as Kim Kaphwan, is in both the Fatal Fury and King of Fighters series by SNK. Kim is a master of taekwondo, and also considers himself a fighter of justice. Since Kim was young and during his taekwondo training sessions, he was always reminded to fight for justice, and use the martial art as a way to accomplish this. One of Kim's defining characteristics is his strong, inherent sense of justice. It is to the point where he has the innate ability to tell whether or not someone is evil or holds dark intentions just by looking at that person. Kim strives for excellence and righteousness in everything he does, be it his fighting or personal life. He is a loving husband and father, and a strict disciplinarian. He is deeply respected and admired by his acquaintances for his honesty and bravery, and has many friends amongst the characters in both King Of Fighters and Fatal Fury (chief amongst them being Fatal Fury's main protagonist, Terry Bogard).

Normal Kim plays very like his his Fatal Fury incarnation while Extra Kim plays closer to his representation in The King of Fighters. Kim in Capcom vs. SNK 2 plays like a fusion of the two versions.