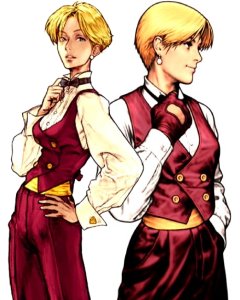 For more information about King, see his Art of Fighting and King of Fighters (Orochi Saga) entries.

King is in both the Art of Fighting and The King of Fighters series. She debuted in the original Art of Fighting as the sole playable female character. King is a kind, trustworthy but violent woman. She is unquestionably loyal to her friends, but relentlessly unforgiving towards her enemies. Although King is a passionate woman, she rarely shows a sensitive side to her friends (and when she does, things just seem to go wrong). She loves to dress in men's clothing and has a great affinity for fine wine. Though King is often at war with her own sex, she appears to not be so with her sexuality and as well has having an implied pregnancy, she seems to be attracted to Ryo Sakazaki. They even have special starting poses to imply this. Although King acts very masculine at the best of times, traces of femininity can't help but show themselves every now and then. For, King assumes a very feminine pose during her taunt in which she says, "C'mon Baby!"

Normal King plays very much like her variations in The King of Fighters. Extra King plays more as an homage to her original incarnation in the Art of Fighting. In Capcom vs. SNK 2, she goes back to her KOF commands.