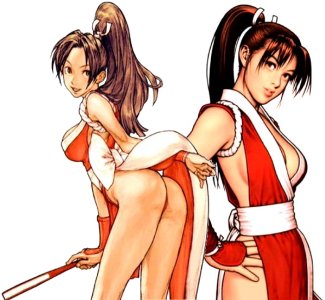 For more information about Mai, see her Fatal Fury and King of Fighters (Orochi Saga) entries.

Mai Shiranui is from both the Fatal Fury and The King of Fighters series by SNK. In her mind, Andy Bogard is her fiancé who studied Ninjutsu with her grandfather, Hanzo. The relationship between the two is often unclear and subliminal, usually on Andy's part, who at times seems to suppress his feelings for her in favor of treating her like a little sister. Mai is very popular with fans, mostly due to her highly attractive character design. Many see her as a prime example of this kind of depiction of women in video games and anime (predictably, Mai's breasts appear larger in art than her printed measurements). She typically wears exceptionally low-cut blouses, dresses, and clothing to maximize the exposure of her cleavage and most fight scenes involving Mai include several shots that focus especially on her breasts and buttocks. Mai seems to have been one of the sexier and hotter SNK women in SNK history. She is also mean to her opponents, but not to her friends, and also insulting her opponents with awful words. In SVC Chaos, she insults her rival, Chun-Li, by calling her pantyhose "chunky legs" and by calling Iori Yagami "gloomy gus".

While Normal Mai is taken primarily from her incarnation in the Fatal Fury series, Extra Mai seems to be a mix of Fatal Fury and KOF together. As with other characters in the original, Mai is a fusion of both styles in her Capcom vs. SNK 2 appearance.