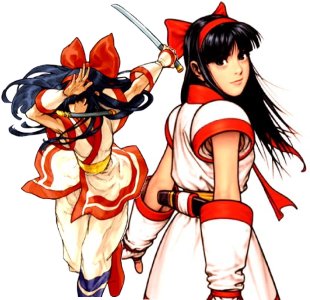 For more information about Nakoruru, see her Samurai Shodown entry.

Nakoruru is from the Samurai Shodown series. She is a young girl dressed in clothing that looks like Ainu traditional clothes. The basic colors of her clothes are white and red. She fights with a kodachi named Chichiushi and a hawk named Mamahaha assists her. The original idea of her came from the indigenous Ainu people of Hokkaidō, Japan, who are analogous in Japan to the Native Americans in the United States. As the Japanese perceive the Ainu as living closer to nature, Nakoruru's role in the game is of a defender of Mother Nature; in some material Nakoruru has been referred to as a priestess of the Ainu religion. She is present in Capcom vs. SNK as the secret SNK character (as Morrigan is the secret character from Capcom) and the sole representative from Samurai Shodown until she is joined by Haohmaru in Capcom vs. SNK 2.