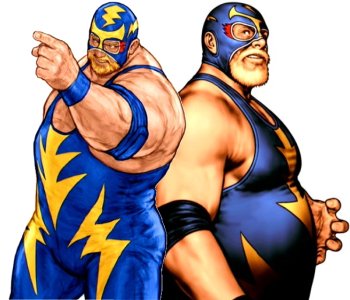 For more information about Raiden, see his Fatal Fury entry.

Raiden originally appeared in the first Fatal Fury (and its 3D remake, Wild Ambitions) as a large character wearing a blue wrestling suit and mask with a yellow lightning bolt down its center. In Fatal Fury 2, he appears in a black wrestling suit and is unmasked. In that form he assumes the persona of Big Bear, and bears a strong physical resemblance to real-life wrestler Big Van Vader. The Big Bear persona is mainly used when he plays himself off as a fan favorite whereas the Raiden persona is mostly used if he plays himself off as a hated villain. Raiden hails from Alice Springs, Australia, and is one of Geese Howard's henchmen, despite his friendship with Geese's enemy Terry Bogard. In the Capcom vs. SNK series, Raiden sparks up a heated rivalry with Zangief from the Street Fighter series.

Normal Raiden represents how player might be most familiar with him in his depiction in Fatal Fury Special. Extra Raiden is a bit more of an original design. As per the norm, Raiden is a fusion of both version in Capcom vs. SNK 2.