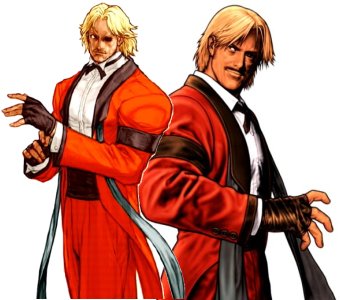 For more information about Rugal, see his King of Fighters (Orochi Saga) entry.

Rugal Bernstein, also known as Rugal or Rugal B. is a recurring boss in SNK's The King of Fighters series and is often considered one of the most difficult bosses in the entire series. According to his official biography, Rugal was born on February 10, with no place specified, possibly Germany. His blood type was unknown. His hobby was "resurrection." He had no favorite food or sport (claimed he's good at everything). His fighting style was an amalgam of various arts, including Hakkyokuseiken and House of Strolheim, the styles used by Geese Howard and Wolfgang Krauser. He has adapted several moves from each character, such as Geese's Reppuken and Krauser's Kaiser Wave, though he also uses his own techniques, like the Genocide Cutter. In the US release of Capcom vs. SNK 2, parts of the game were also censored; for example, the word "Genocide" was taken out of his trademark move Genocide Cutter and it became "Destroyer Cutter". Rugal's DM version, Genocide Heaven became "Total Annihilation" in the English version as well. The voice clip for Genocide Cutter is also removed and replaced with a grunt.

Normal Rugal plays like his The King of Fighters '98 appearance in the Dream Match, while Extra Rugal plays more like the Omega Rugal seen in the same game. In Capcom vs. SNK 2, these identities are distinguished between his normal version and Ultimate Rugal.