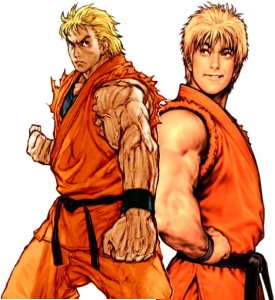 For more information about Ryo, see his Art of Fighting and King of Fighters (Orochi Saga) entries.

Ryo Sakazaki is the main character in Art of Fighting, and one of the main characters in The King of Fighters. The story of Ryo begins in the first Art of Fighting in a traditional damsel in distress story. Yuri is kidnapped by Mr. Big, a local criminal mastermind. With the help of best friend and rival Robert Garcia, Ryo manages to confront Mr. Big, leading him to a karate dojo where a mysterious man (originally unnamed in the game, but was named "Mr. Karate" by fans, and officially named as such in later games) challenges the two to a fight. When Ryo prevailed, he threatens to kill Mr. Karate unless he knew that Yuri was alive. As Ryo prepared to kill him, Yuri appears, telling Ryo to stop, for Mr. Karate was their father. During this journey, Ryo met a bouncer named King, a Muay Thai expert. There has been some unspoken romantic tension between the two.

Normal Ryo is based on his Art of Fighting style of play. Extra Ryo is based more on his appearance in The King of Fighters, in particular the versions from '96 and beyond. Ryo in Capcom vs. SNK 2 is a blend of the two styles.