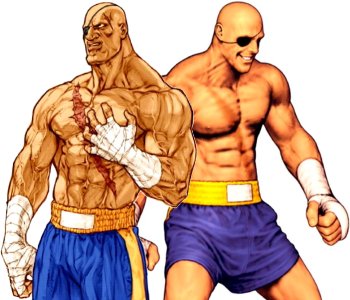 Sagat worked his way up the fighting championship ladder all his life, and enjoyed a long stay at the top as an unbeatable force… until the day he faced a young inexperienced warrior named Ryu. Towering over the determined fighting, victory was within Sagat's grasp, an inconsequential victory to add on to a list of hundreds, but it was stolen away from him. He couldn't be sure, but he sensed an inhuman power awake in the boy, and the skin on his chest was cut wide open by a force exerted by Ryu when he performed a dragon punch that knocked Sagat out cold. Broken and defeated, not just in his body, but also in his mind, he accepted M. Bison's offer to be a personal body guard with no other direction to turn. But inside, he focused constantly on the day when he would meet and rematch Ryu and prove once and for all who the better fighter really is.