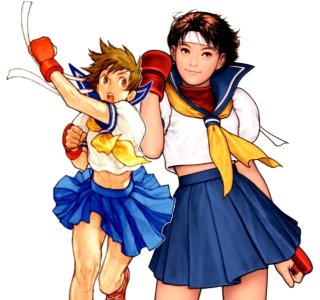 Sakura was once an ordinary school girl who liked to be the best at whatever she could. The competitive spirit was very much alive in her, but she had no inspiration to channel it into until she saw a warrior with a red headband apprehend an armed robber with his bear hands. She asked the warrior's name and he replied Ryu and went on his way. Ever since that moment, Sakura was sure that she wanted to become a great fighter and learn from Ryu. She trained very hard on her own, attempting to master the moves she saw him perform strictly from her memory, and she actually succeeded in replicating many of his attacks. But she knew she needed to find him in order to completely master those techniques, so she launched on a quest to find her, dragging her poor schoolmate and friend along with her.

While Extra Sakura plays very much like the Street Fighter Alpha version that made her a popular character, Normal Sakura is a rather original design. Her ki does not create a projectile, but rather a spark that stays in front of her. Her dashing uppercut stays more on the ground. And her tornado kick has been replaced by a hopping spin kick that can be followed up with another attack. While her Capcom vs. SNK 2 character plays a little more like her Alpha style, she is still predominantly an original design.