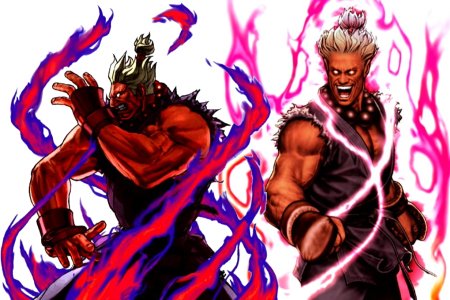 Shin Akuma (Shin Gouki in Japan, which means True Demon) was created as a secret character and boss. The two versions operate very similarly, but Shin Akuma is faster, deals more damage and can throw two Zankū Hadoken at once. Also, his Shun Goku Satsu is much faster (making it harder to evade), and in some instances, inflicts more damage (e.g. Capcom vs. SNK 2). In some instances, Shin Akuma also has more life-threatening specials as well (e.g. Misogi). Shin Akuma's appearance is very similar to Akuma's except he exhibits white hair and a slightly darker shade of skin.

Storywise, Shin Akuma is merely Akuma using the full extent of his power, compared to the "in-game" version which is Akuma voluntarily holding back his power to avoid ending fights prematurely. In the Capcom vs. SNK series, a different form of Shin Akuma appears. This form of Akuma achieves a new level of power when a dying Rugal Bernstein pours his Orochi power into him.