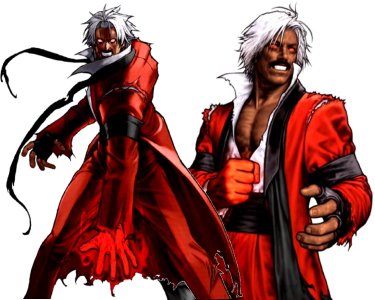 Rugal is generally believed to be dead since the events of KOF 95; however, the Rugal fought in that game is referred as "Omega Rugal", a cyborg version of the character; in one of the illustrations available in the PlayStation version of KOF 98 there's an illustration showing a series of human-sized test tubes with Omega Rugals in them, hinting that the individual destroyed by the Orochi power in 95 may have been a guinea pig and not the original; Rugal has made non-canon appearances as a playable character in The King of Fighters '98 both as normal Rugal and Omega Rugal, in The King of Fighters '2002 just as Omega Rugal, and in the Capcom vs. SNK series as normal Rugal and a new version, God Rugal (Ultimate Rugal in U.S. versions). The latter version was designed by Capcom, not SNK, and is the result of Rugal having absorbed Akuma's Satsui no Hadou (or Dark Hadou) power after defeating him in battle. His capabilities were also toned down in the Capcom vs. SNK series, to make him more balanced against the rest of the cast. After a player defeats God Rugal, at the end of the cutscene and before the credits, Rugal undergoes a transfiguration and his visage clearly resembles Akuma's, hinting that Akuma's spirit was able to overtake his body, due to his weakened condition (creating a true "God of Fighting"), or perhaps something else. This can also be seen as an homage to Rugal's death in the King of Fighters canon.