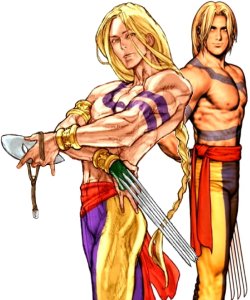 Where Vega (known as Balrog in Japan) got his love for murder is unknown. As the product of the union between a Japanese martial artist and a Spanish bull fighter, Vega claims a vast heritage, which he puts to deadly use. Wealthy, and full of opportunity, his enjoyment of murder is only topped by his own vanity. He attracted the attention of M. Bison, who saw his lust for killing, and assigned him to orchestrate the assassinations conducted by the Shadowloo dolls. One of the only missions that Vega has ever failed is the tracking down and killing of the one doll who ever broke free of Bison's control: Cammy.

Normal Vega represents his Street Fighter Alpha series style, with all of the extra moves and Super Combos that he gains. Extra Vega is limited, closer in presentation to his Super Street Fighter II Turbo style. In Capcom vs. SNK 2, he has access to all of his Alpha moves.