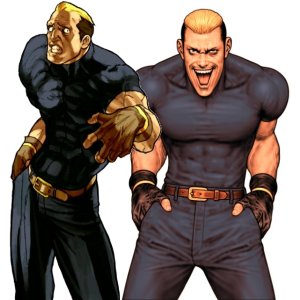 For more information about Yamazaki, see his Fatal Fury and King of Fighters (Orochi Saga) entry.

In contrast with most of the other fighters in combat video games, Yamazaki does not use any particular martial art - he is a self-taught brawler, and uses a wide variety of attacks in his fighting, including unfair and dishonest moves such as kicking sand in his opponent's eyes, and his ever-present knife. He also rarely takes his right hand out of his pocket unless he is using his knife. Yamazaki never had parents to look up to when he was growing up, so he quickly fell in with the wrong crowd at a young age. Eventually, after years of petty crime, he fell under the tutelage of a crime boss, where he soon climbed the ranks of crime until he became the boss's right-hand man. One day, Yamazaki and his boss went to a warehouse where an illegal deal was taking place. Yamazaki felt that something wasn't quite right with the situation, and told his boss so. The boss laughed Yamazaki's feeling off and ordered him to stay with him. Unfortunately, the deal was a setup, and both Yamazaki and his boss were ambushed by rival criminals. Yamazaki's boss was killed, and seeing the only "parent" that he ever had die before his eyes drove Yamazaki to insanity. He is now completely psychotic and is extremely mentally unbalanced. In 1995, Yamazaki was signed up by Jin Chonrei and Jin Chonshu to protect them and the scrolls of immortality.