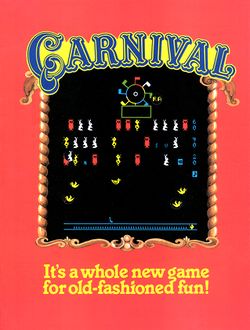 Carnival is a fixed shooter arcade game that was released by Sega in 1980, and it was licensed to Gremlin Industries for US manufacture and distribution; it runs on their Vic Dual hardware, and was the first game from them to use the General Instrument AY-3-8910 (running at 1.193181 MHz).

"Carnival" – in essence, a video shooting gallery – is known to be the first game to have a bonus round, wherein it was not possible to lose a life; the main objective was simply to earn bonus points. In this instance, it was the "shoot the bear" screen, where hitting the bear repeatedly earned a larger bonus. Additionally, the game is known for using "Over the Waves," the music that is commonly associated with carnivals and fun fairs; the song increases in key and tempo as a round progresses.

The player's main objective is to eliminate all targets in a three-row, scrolling gallery, plus eight pipes in a rotating carnival wheel. The gallery contains rabbits, owls, ducks, numbered squares and the letters in the word "BONUS." The player controls a pistol at the bottom of the screen (moving left to right), with which it can fire bullets toward the gallery.

The player's supply of bullets is exhaustible; at the bottom of the screen is a display indicating the number of bullets remaining; it will flash once the supply drops below 10 bullets. The pistol has more bullets in the early rounds, but fewer bullets are provided at the outset of a round in later rounds, putting a premium on accurate shooting.

In the bonus round, when the player shoots the bear, he will rear up, roar, and begin moving in the opposite direction - and each hit will also speed him up (and increase his point value which is displayed above him); he moves slowly at first, but hitting him 10 or more times causes him to move at lighting-fast speed. Once the bear escapes from either side of the screen, the next round will begin; as the game progresses, additional bears will appear at the end of each round up to a maximum of four.

The first and third rows of targets will move from left to right but the second one will move from right to left - and any targets that go off the right side of the screen on the third row will reappear on the left side of the screen on the first row. The point values you will receive for shooting a target on each row are displayed on the right side of the screen, and they will increase with each round; for instance, in round 1, the values are 10, 20 and 30 points going bottom to top, and they are multiplied by the round number for future rounds (e.g., round 2 has 20, 40 and 60 point values). The numbered squares will also give the pistol additional bullets when shot, and only appear on the first and second rows.

Five letters that spell the word "BONUS" are also mixed into the three rows of targets - and if the player shoots them in the correct order, he will receive a special bonus. However, if he shoots them out of order the bonus indicator in the top-right corner of the screen will disappear until the next round; if you shoot a "B", the bonus value will stop increasing for the current round.

And, whenever a duck goes off the right side of the screen on the bottom row, he will fly down towards your pistol - but if you cannot shoot him quickly enough he will fly down to the two rows of bullets, and steal ten of them. This means that if you have less than ten bullets remaining, it will end the game.

Four special yellow signs will also appear in the top-left corner of the screen. The two positive ones have plus signs, with bullets and point values - and once they have appeared, the value will start decreasing until they eventually disappear. If you can shoot one before it disappears, you will receive the amount of bullets or points that remained at the time of the hit; however, the two negative ones have minus signs, with numbers of bullets or bonus points, and if you shoot one when it appears, you'll lose that amount of bullets or bonus points.

The pipe wheel features eight pipes (two of each colour) - and the sign below it indicates the point value you will receive for shooting one, but it also prevents you from shooting at them when they are orientated diagonally. Every time you fire a bullet, it will decrease the pipes' value (unless you hit a pipe); if you hit both pipes of the same colour consecutively, you will receive a special bonus of four times the current pipe value.

The game ends upon the player exhausting his supply of bullets.