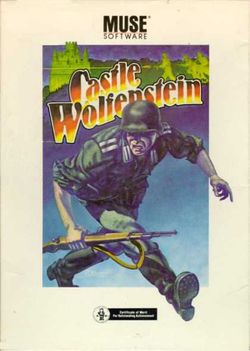 Castle Wolfenstein is a stealth-based]] computer game, the first of its genre, developed by Muse Software for the Apple II. It was first released in 1981 and later ported various other systems.

The game is a slow-paced stealth game set in World War II. The game's main objective is to traverse the levels of the castle to find the secret war plans and escape alive. Progressively higher military ranks are earned upon each successful escape with the war plans, and the game becomes correspondingly more difficult as each higher rank is achieved. There are 8 ranks, beginning with Private, and culminating at the rank of Field Marshall.

The game is played from a top-down perspective, though the characters are seen upright like in a side-scroller. The player traverses the levels by sneaking past guards, impersonating Nazi soldiers and sometimes even killing opponents. Castle Wolfenstein can be controlled with a joystick, paddles, or a keyboard.