The enemies that appear in this first leg are simple to destroy. Consider these practice stages in preparation for more difficult ones to come. Practice the use of items, the timing of your whip, and jumping. The Vampire Bat can be destroyed with flying weapons.

The only enemies that will encounter are Ghouls and Panthers. You can proceed safely by striking them with your whip. Because the Panther's attack is faster than you might expect, try to time your strike accordingly. 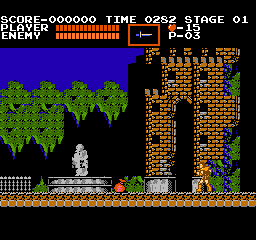 Jump beyond the door for this bonus 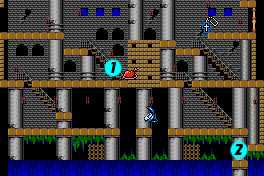 Although Stage Two is short, you can't clear it without using the underground path. New enemies include Fishmen and Bats. The timing of your jumps is very important since you'll lose a life if you fall in the water. 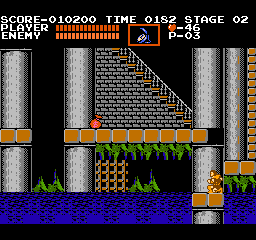 Crouch down on the lowest platform for a bonus

This is the final stage where the boss, the Phantom Bat, awaits. As you descend the stairway, an important item, the Axe, is hidden in the candle on your right. 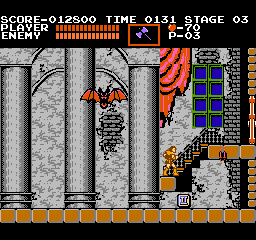 Don't miss the Shot Multiplier before the fight

Before heading upstairs in the castle, you must do battle with a giant black Phantom Bat who swoops down from the high vault. Use the Axe, which is located above the steps to the left, or jump onto the block and use your whip (you can use the whip in conjunction with the Stop Watch, if you have it). The Phantom Bat is the easiest of the guardians, and the Double Shot will help. As with all bosses, once you defeat it, you'll get a glowing orb that refills your energy and allows you to pass to the next stage.