Beginning with this leg, the number of enemies, as well as your challenge, increases. Important techniques, such as anticipating enemies' movements and hopping over obstacles and holes in the floor, are now required. 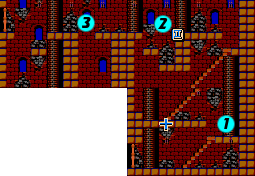 The only enemies appearing in Stage 4 are Spear Knights and Bats. This is a short stage and should be relatively easy to clear. The trick is to pay attention to the Bats' movements and to strike the Spear Knight repeatedly with your whip. 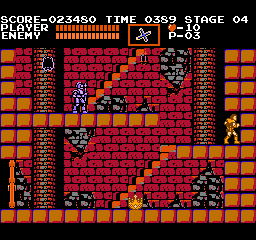 Walk into the wall for a bonus

The small Medusa Heads appear throughout this stage from the far side of the screen. You may have some trouble destroying them at first, so focus on dodging instead. Be careful of the holes scattered about the place as the Medusa Heads will likely knock you into them. 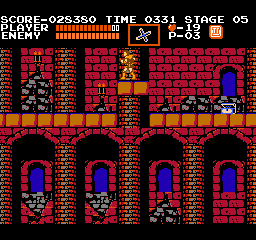 Stand still on the high platform until the bonus appears

In this stage, you encounter spike traps as well as fire-breathing Bone Towers and Ghosts. 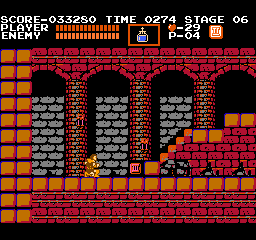 See the boss section for more.

While the Medusa of Greek mythology (and future Castlevania games) could turn a hero into stone, this one is fairly easy to beat. A continuous attack using the whip or Boomerang will work wonders (especially if you have the Triple Shot), but it's even easier using the Holy Water since she almost always hovers close to the ground. If you have the Stop Watch use it to freeze her and her snaky hair, then whip her continuously.