The enemies appearing in the third leg have more complex movements and attacks, making them harder to destroy. The enemies, especially the Fleamen, are much harder to dodge than anything you've encountered so far. The enemies are also stronger - you will now lose three bars of health per hit instead of two. Despite the slowness of the bosses, they're strong enemies and difficult to destroy.

There are four enemies here: Ghosts, Fleamen, Skeletons, and Ravens. The Axe is your most effective weapon, as all of these enemies can fly, or at least jump. Try to remain calm so you won't be tricked by your enemies' movements. 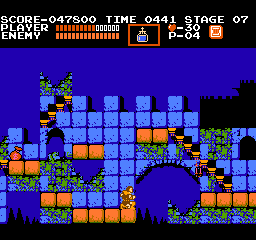 Crouch at the end of this platform for a bonus

You will be facing Medusa Heads and Skeletons on the lower level and Bone Towers and Ravens on the upper level. When a Raven flies at you, attack it with your whip. Against the Bone Towers, remember to crack your whip repeatedly during the intervals between its fire-breathing. The Boomerang is also very effective against the Towers. 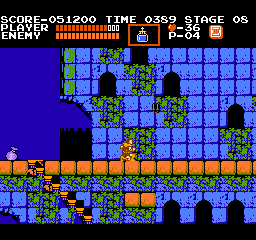 Crouch here to reveal a bonus to the left

The key to conquering this is being able to whip and jump at the proper time. You can use the Stop Watch that you got in the previous stage against the normal enemies, but it is useless against the Mummy Men, so collect the Dagger hidden in their room if you need it. 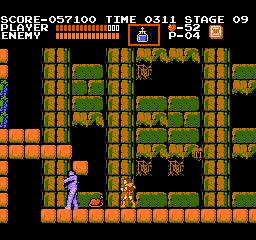 The food hidden here can save your life

As you will discover when you meet them, the two mummies have become a bit unraveled lately. The bandages they throw at you will cause damage. The Stop Watch is useless against these two, but the Dagger, Holy Water or Boomerang all work well against the petrified pair, especially if you have a Shot Multiplier. You'll have to dodge while you're attacking and it isn't going to be easy. Speed and technique will get you through this fight. Alternatively, if you have the Boomerang, a Shot Multiplier, and can get the two mummies to overlap, you can throw multiple boomerangs to kill them nearly instantly due to a glitch that causes damage to be dealt every frame against overlapping enemies.