Castlevania: Circle of the Moon/Gameplay

For the full story (with spoilers), see the story page.
See the characters page for more information.

The game takes place in 1830, ten years after the Vampire Hunter Morris Baldwin defeated Dracula. A cult, lead by Camilla, is working to revive Dracula. Morris and his two apprentices, Nathan Graves and Hugh Baldwin storm the castle in an attempt to stop the resurrection ritual.

See the cards and DSS pages for more on the magic system, weapons for combat information, and relics for special abilities.

Circle of the Moon has similar gameplay as other modern 2D Castlvanias (such as Aria of Sorrow, Symphony of the Night, and Portrait of Ruin). Your goal is to explore Dracula's castle, navigating across platforms and hazards, while defeating bosses and other monsters. Along the way you will find items that will make you more powerful and enable you to access new areas. What makes CotM different than other modern Castlevanias is that it has a heavy focus on platforming in addition to exploration, as well as a slightly higher degree of difficulty. Like Harmony of Dissonance and the older Castlevania games, your primary weapon is a whip, and you cannot get new weapons (unlike HoD, you can't even upgrade it).

The unique gameplay element in CotM is the DSS system, in which you access special effects, weapon modifications, and magic spells by pairing two cards together. These cards are found by defeating certain enemies that drop cards when defeated. Once you have the card it is never lost or used up, allowing you to use different combinations as necessary. Effects include adding an elemental attack to your whip, boosting strength, summoning monsters and familiar, and transforming into a skeleton.

In addition to magic, the traditional Castlevania sub-weapons return. Uses these weapons consumes hearts, which can be replenished by finding more in candles or from defeating enemies. Other one-time use items that restore health, magic, hearts, and restore your status are also available. However, unlike many other Castlevanias, there is no store to purchase them from. Items are dropped randomly from enemies, so stockpiling supplies is difficult and time consuming.

You have several different means of attacking, but your primary one will be the whip.

See the stats page for more. 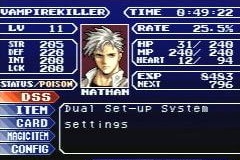 You have the standard RPG stats, which go up as your level increases. Leveling up is the standard fare as well — defeat enemies to get experience points. When enough are defeated, you level up. That simple. The amount of points each stat goes up is constant (10 for each state, except Hearts, on normal mode). Using a save point automatically restores HP and MP.

Note: Some later Metroidvania games have Int value affecting magical attacks. In this game however, it is not true.

Other stats that indirectly affect you:

Like Schrödinger's cat, Nathan can exist in states other than alive and dead. Specifically:

All enemies are associated with a specific element. Attacking with a weapon or spell of the opposite element does extra damage while attacking with the same element does reduced damage. Your whip (unless enhanced by a DSS combination), sub-weapons, kicks, and equipment are all non-elemental so they have the same effect on all enemies.

There are ten elements, each with an opposite and an associated card. 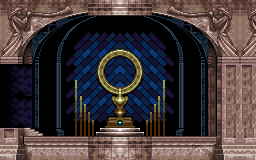 As is normal in Castlevania, the game can be saved only in save rooms. This time around the save points look like weird towers with a ball of red energy in them and are marked in red on the map. Save points also restore MP and HP completely, even if you don't save the game. If you confirm you want to save it overwrites your existing game file. To create multiple restore points, you have to save, reset the game, and then copy the file on the system menu. 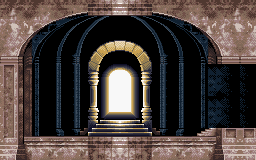 There are five warp points that will take you around the castle. Warp points (except the first) are only usable once you've entered the room from a doorway. The first warp room is sealed off, but by going through the second warp room, you can unblock the passage to it. Warp rooms are marked in yellow on the map.

See stats for more on character growth and individual mode pages for more.

In what has become a tradition with modern Castlevania games, after you beat the normal game you can play through a variation of the game. Normally, this means playing as a different character that was related to the story (in Symphony of the Night you could play as Richter Belmont after beating the game as Alucard, in Harmony of Dissonance you could play as Maxim after beating the game as Juste, and so on). Circle of the Moon modifies that idea a bit — instead of playing as a different character, you continue to play as Nathan, but with different stats. The story, gameplay, and order of events are exactly the same, however the changes in your stats and abilities forces you to change your fighting style.

In order for a mode to be unlocked, you have to beat the previous one. So, beating VampireKiller mode unlocks Magician, beating Magician unlocks Fighter, and so on. To play a mode after unlocking it, simply enter the password as your name (if you want you can change your name later from the system menu).

Go to top
← Castlevania: Circle of the Moon | Gameplay | Controls →